As companies grow, do politics, internal competition, backstabbing, and inefficiency inevitably slip in?

At this point of time, we are blessed with a great culture at Userlike. We realized this especially a few weeks ago, during our annual company retreat .

We have a team of twenty something people, all motivated, getting along, and pulling in the same direction. Some have never experienced anything else; those who have are especially grateful. 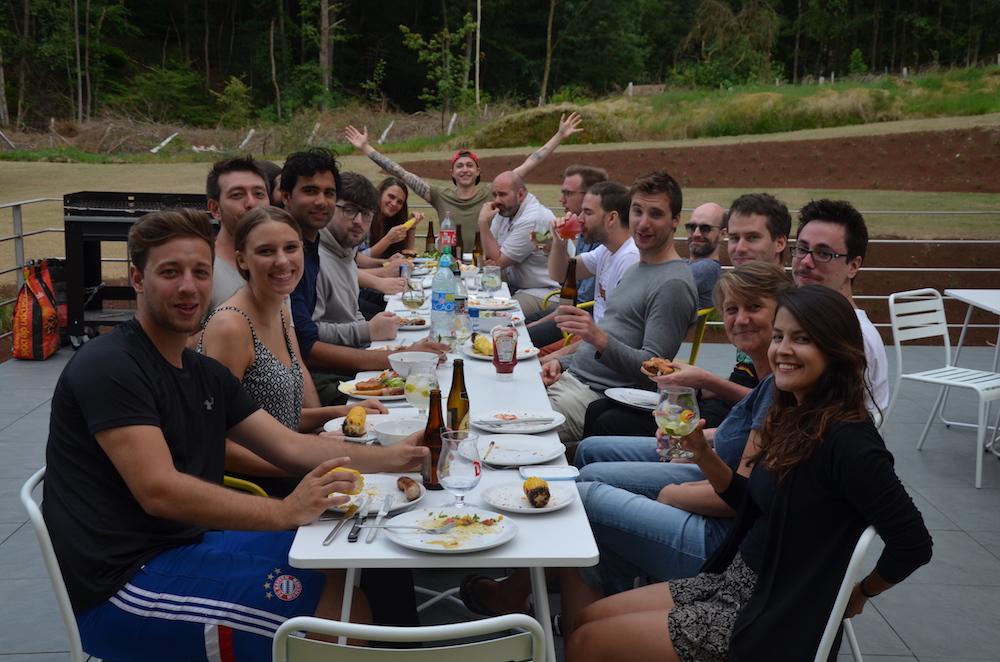 But we're growing. Can we protect this precious oasis?

We don’t know, but we’ll do what we can. In this effort, we’ve come up with this list of silently toxic team behaviors, those we regard as precursors of everything you’d associate with nasty corporate life.

Some we occasionally spot in ourselves; others come from stories of those working in larger companies. This isn't about obviously toxic behaviors like discrimination, but about the silently toxic ones – those that creep in unnoticed.

We hope this list will guide us in quickly spotting the slippery slopes – and pulling back on firm ground those who start sliding.

We are territorial by nature. When team members from a different department criticise a blog post I wrote, my knee-jerk reaction will be to defend it. Thoughts like "Why are they intervening with my area?” or "That project belongs to marketing, not to development,” pop up easily.

But we should cut such territoriality short. Cross-disciplinary input is priceless, exactly because it comes from an entirely novel angle.

This ties in with the above. We like to be in control of everything. In a small startup team, everyone has a wide area of responsibilities. As the team grows and a certain level of specialization kicks in, it can be painful to let go of some of that control.

In the early days, it was possible for Timoor, David, and me to be on top off everything. With a team of 24 – which is still relatively small – that’s just not possible anymore. 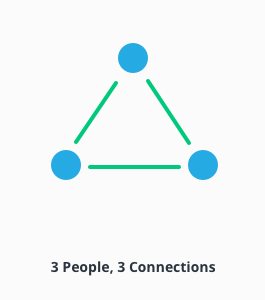 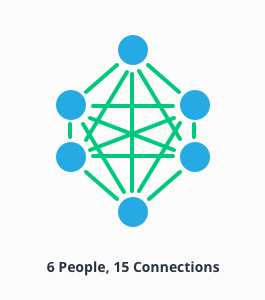 Even if your team grows in a linear fashion, the number of interpersonal connections grows exponentially. Division of responsibilities is the only way to manage this eruption of things happening. There's a positive side worth mentioning: you learn to trust qualified people in making qualified decisions.

Bob has been working at his company for three months and his manager Janet is enthusiastic. Bob looks professional, communicates with clarity, proactively involves himself into an array of projects, and tips Janet off about inefficiencies in the team.

Bob’s colleagues despise him. Bob is always sucking up to his manager while treating those next to and below him like trash. To appear busy and earn a promotion, Bob spreads himself over a wide arrange of projects – without really contributing to any of them.

Bob is a corporate sociopath. A career-driven specimen that thrives in chaotic, multi-layered environments in which the fastest way to the top isn’t reached by excelling at your work, but by excelling at politics.

Alarm bells should start ringing whenever those above are applauding while those below are complaining. The difficult thing is that many cultures prevent negative noises from ever leaving their organizational longitude. For this to happen, you need a culture that celebrates candor .

People feign expertise when they feel threatened, fearing others might perceive them as inadequate. Or they've simply identified the behavior as a road to success.

Having someone that pretends to know more than she does can wreak havoc on your organization. Especially when you're dealing with a gifted liar, or when the rest of the team cannot properly assess the topic.

How could two business majors judge the work of a developer? The developer could spin them endless jargon-stuffed stories of why the milestone wasn't reached. Without any programming experience, they have no idea.

How much better it is to have someone who happily admits what he doesn’t know about. This way, you can focus on gathering more information or defending against the unknown.

Some signs that give an imposter away:

When spotting the feigning of expertise, one should first try to uncover the motives. Is it an attitude issue that can be corrected? Is your culture unforgiving of ignorance? Or are you dealing with someone you should let go?

Twaddling is the tendency to keep on talking even though you're not adding a lot of substance. The queen of twaddling is probably 2007’s Miss South Carolina Teen USA, but you'll run into twaddling and wordiness everywhere.

In a team context, it often manifests itself in meetings. Instead of, say, reporting briefly and and to the point about a drop in blog readership over the past month and its hypothesized cause, I could go on explaining exactly how I found out about the drop, who I told about it, what thoughts went through my head, how important it is to get this right, etc. There’s no limit to the scope and detail.

The results are noise and lengthy, tiresome meetings.

If you're asking an audience for attention, they’ll subconsciously weigh the return of this investment. A lot of text without a lot of content will make them switch off.

Twaddling flows from the felt need to say something. To add, even when you have nothing to contribute. I suspect it results from a faulty reversed causality: Important work needs a lot of coordination and discussion. If I discuss a lot about my work, it must be important.

You would not believe how difficult it is to be simple and clear. People are afraid that they may be seen as a simpleton. In reality, just the opposite is true.

What’s more, twaddling is infectious. When you see your colleague claiming all that primetime, you may want to claim some more of it as well – just to show your work is just as complex and important.

When this phenomenon manifests itself, dig for its origin. Perhaps the twaddlers feels the need to defend their position or department, which would indicate unwanted internal competition.

No matter how flat your organization, there’ll always be some level of hierarchy. And with hierarchy comes authority. But how that authority is carried around makes a big difference.

The problem with strong authority is that it eats away at the sense of responsibility from those who aren't at the top of the pyramid. Strong hierarchies justify differences – in responsibility, ownership, and input. Why share your ideas about improvements if you feel like a bolt at the bottom of the pyramid?

What’s more, authority eats away at candor. This is clearly illustrated in the switch to crew resource management (CRM) that airlines have gone through. The pilot’s authority used to be untouchable. If a copilot suspected an oversight, he wouldn’t dare mention it. CRM breaks this authority bias and forces the entire crew to discuss thoughts and doubts openly.

Authority is uncalled for when it doesn't serve a purpose. Sometimes the team might need some firing up. That's alright. But when you're just acting bossy for the sake of being bossy, when you're commanding while asking would do, you're being needlessly authoritative.

In a healthy company culture, people respect the company structure, but only showcase authority when it's needed.

7
Fear of speaking out

There will always be things left unsaid, frictions below the hood. A positive company culture uncovers and resolves such frictions before they turn into an engine breakdown.

A fear of speaking out is common in many workplaces. Often the suppressed topic is a critical thought that isn't spoken out for fear of the consequences.

Jane might think, “Why did Bob get that promotion?” A question like this will be easily labeled as ‘envy’, but it might be a genuine concern.

If Jane is right, and Bob’s promotion was unfair, an honest talk with her manager Janette could make her see that Bob is a corporate sociopath, and adjust her views accordingly.

Jane’s thought could also be based on a bias or on incomplete information. In this case, a talk with her manager can make her realize that Bob’s promotion was, in fact, fair, or at least it could moderate her views.

Either way, an open talk ensures that damage is minimized. But that can only happen when both sides subscribe to the value of candor and to the well-being of the company. Of course people with less authority in a company won't be candid unless they are absolutely sure that they're treated with candor first.

The above open scenario can only work when both Jane and Janette don’t put themselves above the well-being of the company.

We’re all selfish to a certain extent. But if that selfishness reaches a level at which it translates into unethical behavior, like nepotism or corporate-sociopathy, it hurts the company.

Good incentives align our selfish desires with the interests of the company. When they don’t, the incentives need adjusting through either a carrot or a stick.

The challenge with candor and transparency is how to balance it with empathy. Honesty ≠ rudeness. Everyone has a fragile ego that needs to be taken into account. There’s a difference between sharing your honest opinion about someone’s performance and cracking down on that person.

If you have something critical to say about someone, do so in private, not in front of a group. An infliction of loss of face is not easily forgiven, and deeply hurts motivation.

The larger the team, the easier it is for people to get away with doing nothing and surfing on the team’s achievements. And worse, the more people are engaged in contributing nothing at all, the more likely for others to follow in social loafing. Parasites flourish in large bodies.

Increased coordination alone makes it hard enough to deal with the natural decrease in per capita output that follows team expansion. Once social loafing sets in, a large team turns into a proper nightmare.

You can counter this phenomenon by making the individual’s impact on the team as visible as possible, and by cracking down on social loafers wherever you spot them.

A good culture strikes a balance between urgency and psychological safety. Too few safety, and the team crumbles under stress. Too few urgency, and the team becomes complacent.

When complacent, you're not thinking about improving, about learning, about moving forward. There’s no need to question what you're doing, to improve your workflows, or to expand your knowledge.

We like Netflix’s analogy of a family versus a team culture:

“We model ourselves on being a team, not a family. A family is about unconditional love, despite your siblings’ unusual behavior. A dream team is about pushing yourself to be the best teammate you can be, caring intensely about your teammates, and knowing that you may not be on the team forever.”

If at times you felt personally addressed when reading the above – excellent! These 11 teamwork behaviors are important to point out exactly because they are so human and thus easy to slip in. We all exhibit them or experience their emotional precursors at times.

This list is based on our own experience at Userlike, and we’ll be sure to expand it as we learn from new challenges further down the path. Feel like I’ve left out some particularly poisonous behaviors? I’d love to hear them. Just hit me up on Twitter .

Pascal is CEO at Userlike, bringing messaging to customer communication.