If you’re working in sales, receiving a definite “no” from a customer can feel like the worst thing. But in truth, your worst customers aren’t those that tell you “no”, but those who remain ambiguous.

They start off with some interest, but then turn vague. They don’t reply to your emails, miss or postpone demo calls and keep delaying decisions.

As a sales rep, your leads and your time are your most important assets. Perseverance is crucial for success, but equally important is the ability to accurately judge which leads are worth your time – and which are not.

Enter the ultimate sales technique for separating the wheat from the chaff: negative reverse sales. It’s a way to turn up the pressure, helping you close deals faster, make clients chase you, and stop wasting time on leads who are never going to convert.

By the end of this article, you’ll have some solid ideas of how you can use negative reverse selling to get your prospects to ditch the “maybe” club by giving you a definite “yes” or “no”.

What is negative reverse selling?

Negative reverse selling is a technique that involves asking questions or making statements against your desired outcome. 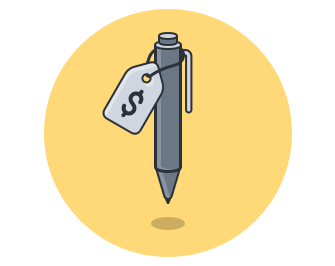 Unlike traditional sales techniques , which are typically aimed at convincing shoppers to buy, negative reverse selling appears to do the exact opposite. Instead of being an eager salesperson, you’re challenging the prospect to convince you that they’re a good fit and that they’re ready to buy.

Like a pendulum, you pull the prospect in a negative direction (maybe you don’t need this) and they go in the opposite positive direction (list reasons why they need it). This effective technique was invented by David Sandler in 1967.

The benefits of negative reverse selling

There are plenty of reasons to implement negative reverse selling. Consider the following: 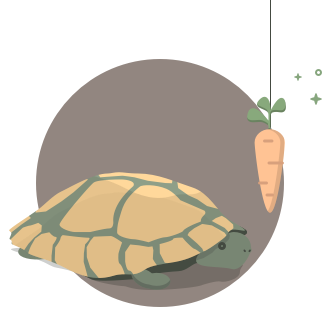 It moves the sales process along. Does a lead keep rescheduling demos? Do they keep giving you responses like “I’ll get back to you,” or “I’ll have a chat with my team and let you know” ? These are classic dodging tactics, and when you encounter them, you can use negative reverse selling to get prospects on your desired path: closing the sale or removing them from the pipeline.

It strengthens your position. Much like in the dating world, confidence is sexy, while being desperate sends people packing. Negative reverse selling puts you in a position of confidence and strength, which in turn attracts buyers to take a closer look.

It makes customers realize that they need your product or service. There’s a lot of truth to the line “You don’t know what you’ve got until it’s gone.” People naturally want something more if they can’t have it. Negative reverse selling brings the scarcity principle into practice. When you take the offer off the table –or hint at doing so– you trigger a sense of loss (“FOMO”), making the prospect realize that they actually want or need what you’re selling.

It gets prospects to admit that they’re not interested, so you can move on. Sometimes, your product or service simply isn’t a good fit. And that’s ok. What’s not ok is being stuck in no man’s land, unsure of whether to move on or not.

Negative reverse selling can get you unstuck. When you’re dealing with someone who’s a slow-mover or has trouble saying “no,” you can give them an out by saying something along the lines of “Maybe now isn’t the right time” or “Perhaps we’re not a good fit.”

These statements make it easier for the prospect to say no, so you can move on to the next deal. In some cases, the customer may even give you reasons why they are not interested. That’s valuable intel for the sales team.

Negative reverse selling shouldn’t be used on everyone, and it doesn’t work in all sales situations. It’s not a primary sales method; rather it should be a secondary tactic — and it should only be implemented when necessary.

Let’s break down some of the best practices around negative reverse selling.

Recognize the right situations that call for negative reverse selling

In all of these scenarios, you are yet to get a definite yes or no from your customers, because they are being evasive. Giving them the push in the opposite direction may save you time and possibly pull them towards your products or services.

A word of caution: don’t go all negative just because of one missed appointment or cancellation. The key here is to look for repeated behavior. Someone who cancels a demo once may have a good reason for doing so. And in some instances, the customer actually needs to speak to their boss, partner or spouse before saying yes.

But if they keep making excuses or always seem to be unavailable, take that as your cue to implement negative reverse selling.

Understand each prospect and recognize the types of people to use the technique on. Agreeable and passive people who go with the flow are not the best fit for this sales technique, because they may just “agree” with your negative statement without putting up much of a fight.

It’s best to target your negative reverse selling efforts towards competitive people who feel the need to prove themselves or to A-type players who like calling the shots.

Negative reverse selling comes in many forms. In some cases, it’s about asking questions that challenge the prospects. Other times, you need to make a statement that seems to prod them to do the opposite of what you want.

Each situation and customer is different, so there aren’t any hard and fast rules about when to use these statements.

It’s also a good practice to add softening phrases or questions before negative statements. For example, you could say “You’re right,” or “I understand” before “our solution may not be the best fit.”

No matter what you decide to tell the prospect, always be respectful. While it’s important to come from a place of confidence and authority, you don’t want to come off as arrogant.

Negative reverse selling doesn’t mean underselling your offerings. It’s one thing to drop hints that your product isn’t a good fit, but it’s a whole other thing if you list your product’s shortcomings or actively give customers reasons not to buy.

You should also know when to stop negative reverse selling. When the customer starts being more responsive, don’t push them away. Gently reel them back in (without being too eager).

Now that you know the ins and outs of negative reverse selling, let’s look at a few examples of the technique done right.

Here’s an email from Natalie Ellis that talks about the reasons people SHOULDN’T join her program. 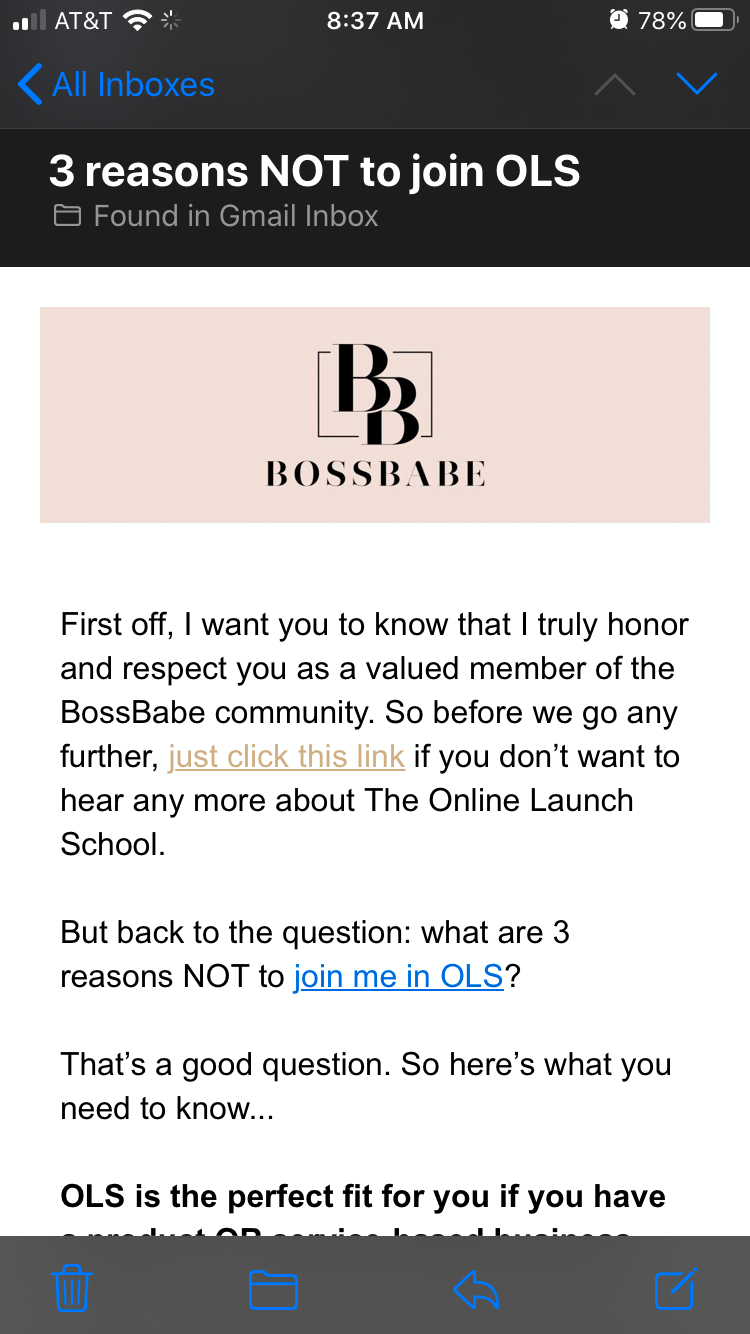 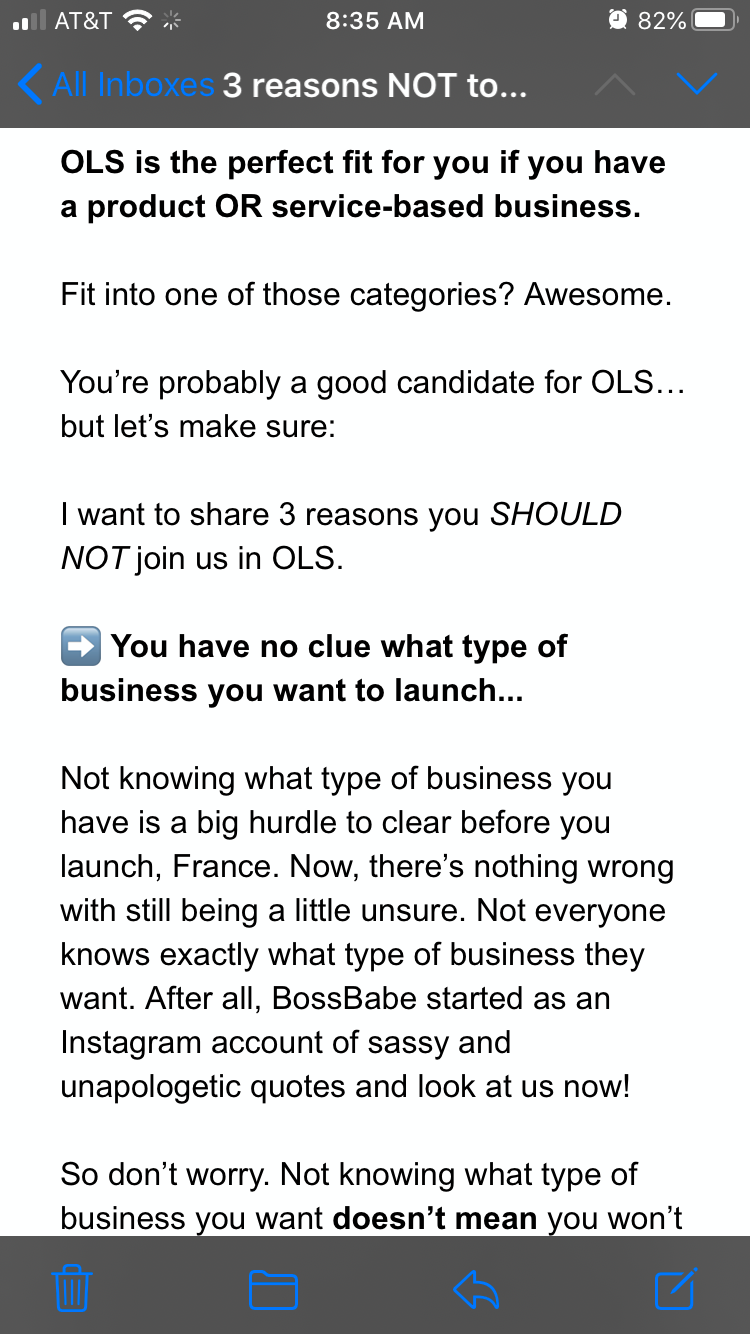 First off, I like how Natalie kicks off her email by saying “I truly honor and respect you.” This is a primary example of not being arrogant when implementing negative reverse selling.

Natalie then lists out reasons why her program won’t be a good fit. In doing so, she’s qualifying customers and making sure that the people who join her course would truly benefit from it. Natalie is also giving off an air of confidence, making her (and her program) more attractive to the right people.

Check out this message asking if a product is a priority for the customer. 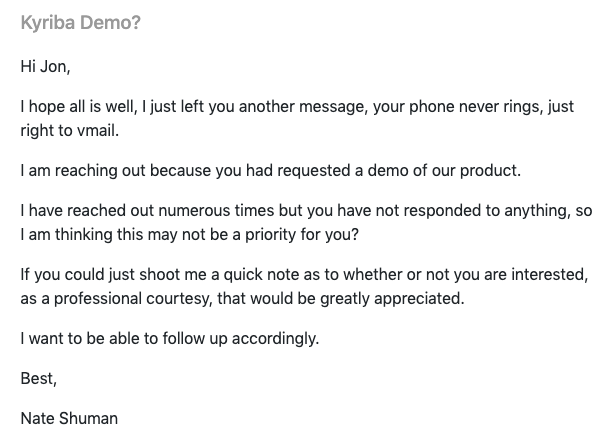 In the email above, the salesperson, Nate, is reaching out to a prospect who’s not responding to his calls. Nate implements negative reverse selling by saying, “I am thinking this may not be a priority for you?”

This line, coupled with what he says next, “If you could just shoot me a quick note as to whether or not you are interested, as a professional courtesy,” is a good way to prod the customer to give you a straight answer.

Check out this “one last email.” 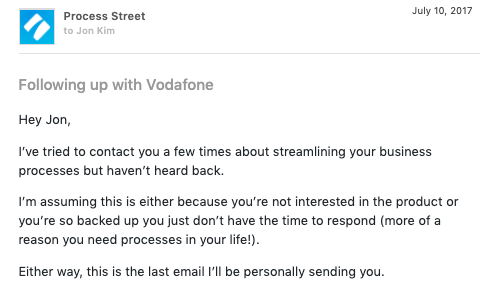 In this message, the salesperson is reaching out to a customer he hasn’t heard back from. Just like with Nate’s email above, he gives the customer an out by saying:

He then closes the email by writing, “this is the last email I'll be personally sending you.”

By saying that, the salesperson is essentially taking the offer off the table. And if the customer is remotely interested in the product, that line could be just the thing that gets them to respond.

Give negative reverse selling a try

Every salesperson has had that experience with prospective customers who won’t give a straight answer. In these situations the traditional sales approach of telling people about your product’s features and benefits may not be the best strategy.

Instead, you should take a step back and allow the customers to come to you. Negative reverse selling is a great way to do this. With the right prospects and situations, this technique can make customers realize that they actually want what you have to offer.

All in all, I suggest you give negative reverse sales a try. Or don’t. It's not for everyone...

Francesca is a B2B content strategist who helps companies increase their website traffic and leads through content marketing. When she’s not in front of the computer, you’ll find her curled up with a mystery novel or spending quality time with her family.