Do People Actually Care About Data Privacy in Messaging Apps?

Consumer concerns about data privacy and security are at an all-time high. How far do these extend to messaging apps?

Every day, millions of people exchange messages with each via messaging apps. Large amounts of personal information and data are being collected and stored.

While the Snowden leaks heightened security concerns and created interest in apps that promised advanced security features, there are few studies which dig into why people use the messaging apps they do and whether these decisions are based on concerns for data privacy.

So, we decided to find out for ourselves. We also wanted to gauge people’s perceptions of how different messaging apps value data privacy and whether these are based on factual information.

Here are the results from surveying 350 people from the DACH region (Germany, Austria and Switzerland).

Messaging app usage across our sample

The numbers confirm what we knew all along: Most people use WhatsApp. Over 73% of respondents said they used WhatsApp to chat with friends and family.

Its nearest competitor, SMS, trailed behind, pulling in just over 11%. 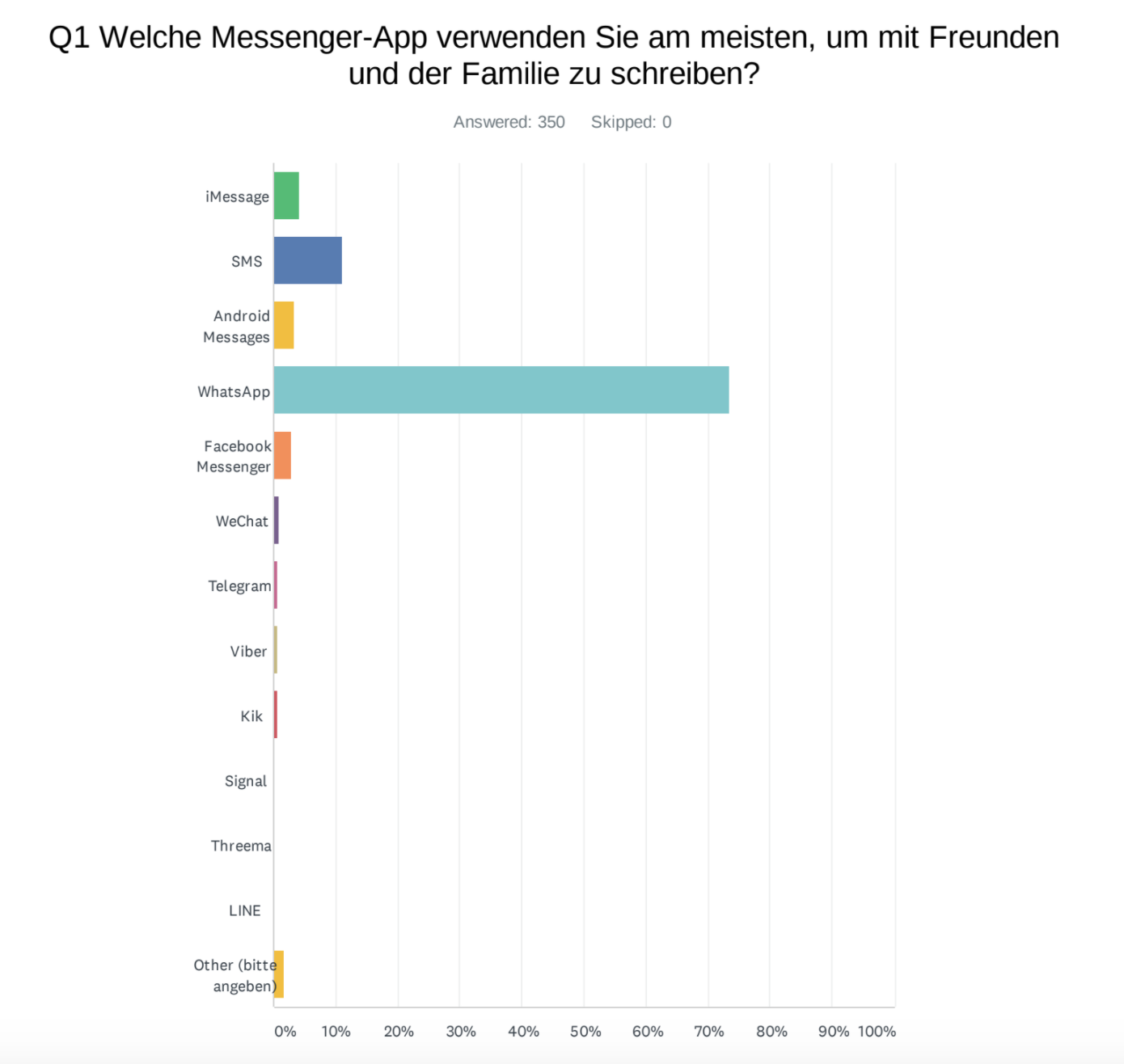 Which messaging app do you use the most to write with friends and family?

Most use messaging apps because family and friends use them

When asked why they use that specific messenger, over 80% of respondents said it's because their friends and family are using them. Since messaging grew popularity because it’s a quick and easy way to stay in touch with loved ones, it’s natural that people are only using messaging apps because of peer influence. 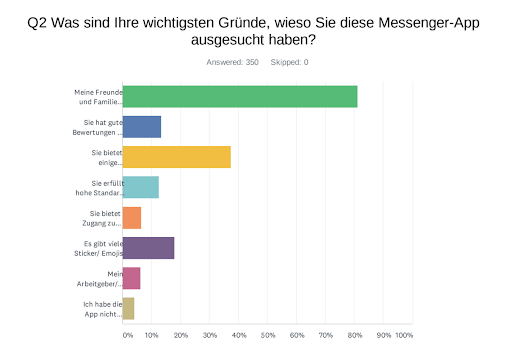 What are your reasons for having chosen this messaging app?

This network effect explains the power law distribution in favor of WhatsApp, and makes it difficult for new entrants to break into the market. The more users a platform has, the more valuable it becomes.

To succeed, new entrants would need to offer something unique or target a specific niche group to gain a critical threshold. Signal and Threema do this by focusing strongly on data privacy.

We then asked how important they thought it was that their messages were private and secure. 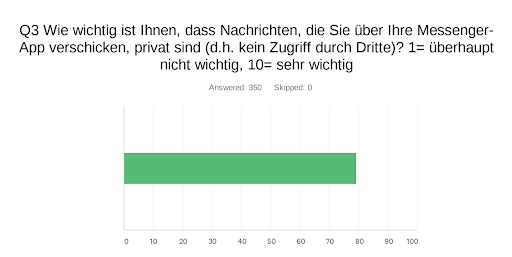 How important is it that messages that you send over your messenger app are private (i.e. no access for third parties)?

Given that data privacy is embedded in the German psyche, this finding is as expected. What’s more, these concerns are likely only to grow as German regulators investigate WhatsApp, Facebook Messenger and co. for possible violations of consumer protection law.

Nearly 35% answered that they always or mostly read through the terms and conditions before accepting them. 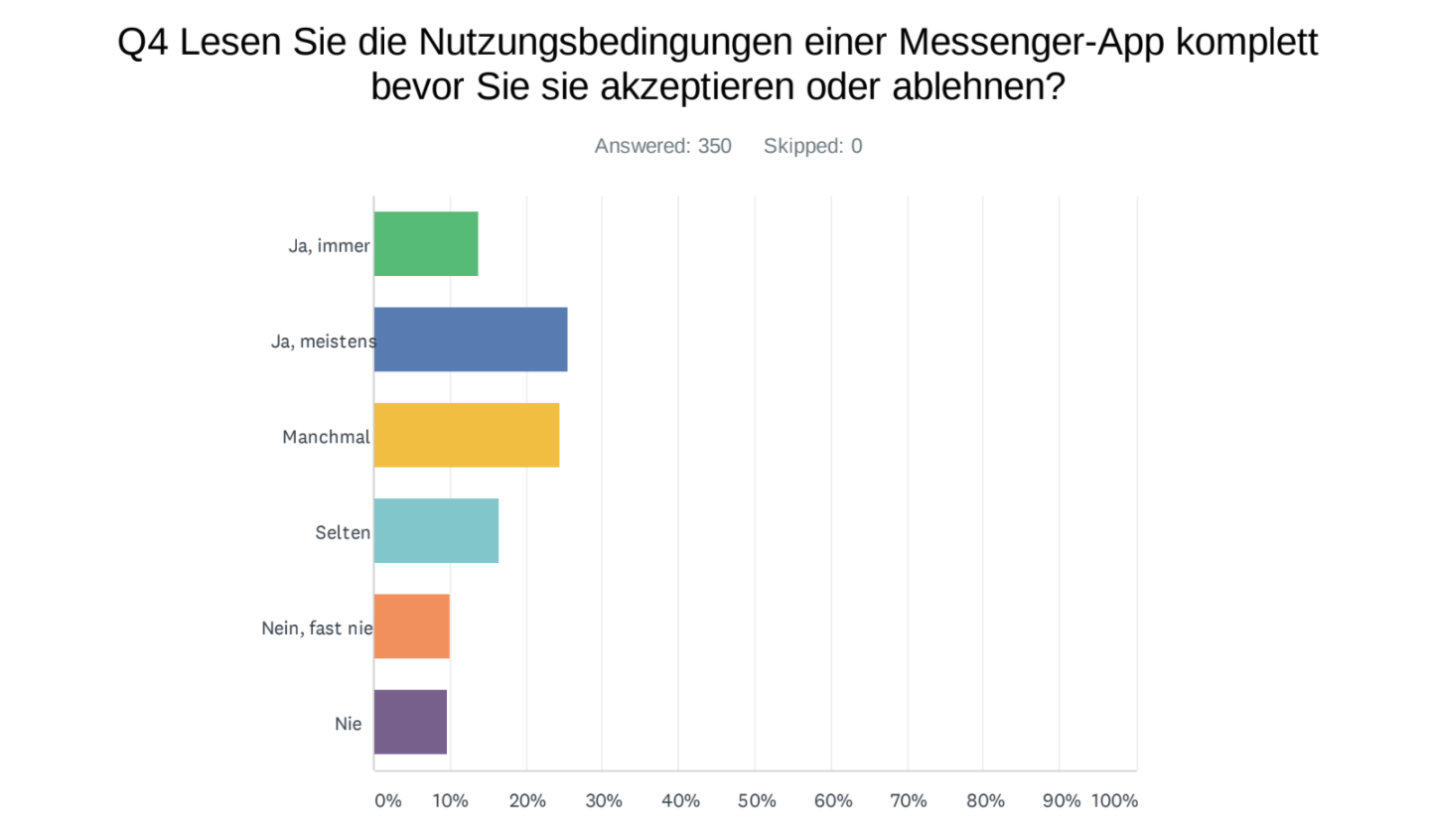 Do you read through the terms and conditions update of a messaging app completely before accepting/declining?

This number was higher than we expected. Updated terms and conditions usually contain multiple pages of legalese, which most people typically click through without reading to save effort.

But the numbers speak for themselves: Most people invest the time to understand what they’re getting into before clicking “I agree”.

Messaging apps will need to be on their toes. People are paying close attention to changing terms.

Almost a third have data privacy concerns about messaging apps

Over 30% of respondents answered that they stopped or avoided using messaging apps due to data privacy concerns. This begs the question: Just how secure are messaging apps? 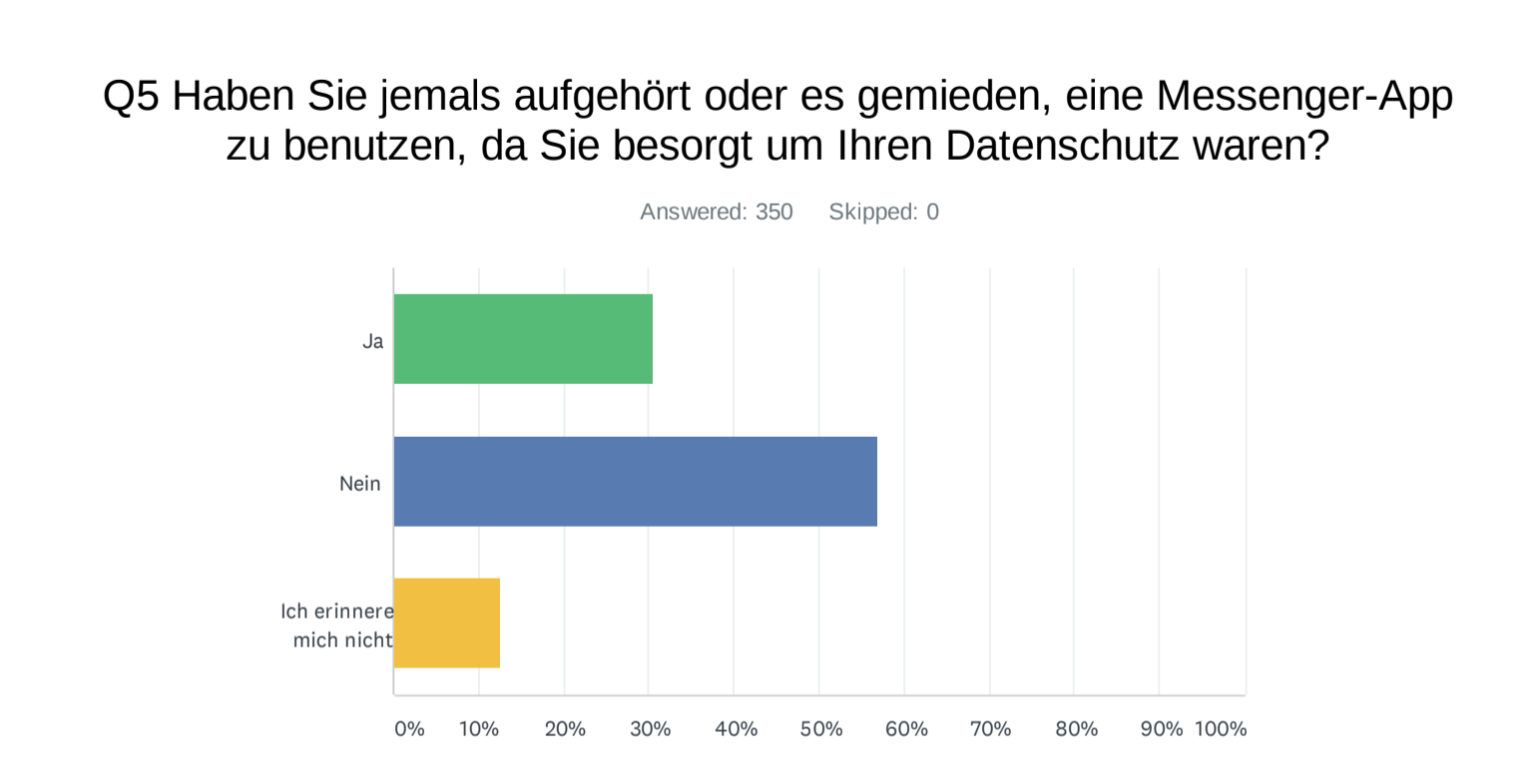 Did you ever stop or avoid using a messaging app out of a concern for data security?

Most messaging apps profess to offer end-to-end encryption, a technology which ensures that only the sender and recipient have access to the content of a message. On some apps, however, this is not enabled by default, which means that users have to remember to activate it.

Another important aspect is the metadata (sender ID, location, device information, etc.) stored for each message. In the wrong hands, this information leaves users vulnerable to identity theft and hacks.

Not all apps are clear about how this data is stored or whether it is passed onto third parties. This is why increasingly more users are turning to secure messaging apps like Threema and Signal, which are designed to generate and store as little data as possible.

Out of 350 respondents, 150 people rated Facebook Messenger’s security as quite good and very good. Given Facebook's image and the fact that messages are only encrypted when you set it up like that, we found this to be quite high. 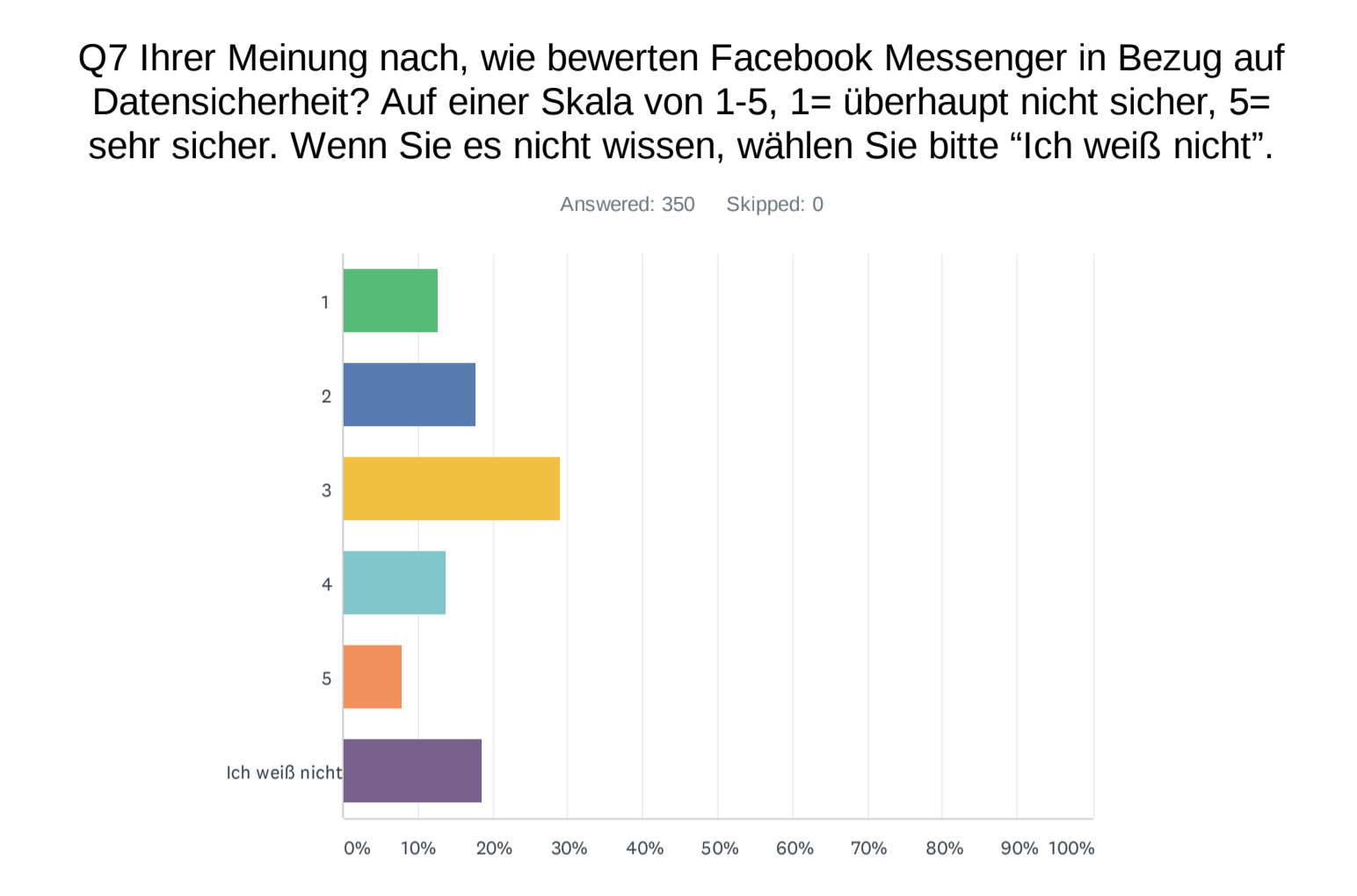 More than half of the respondents considered WhatsApp to be secure or very secure. 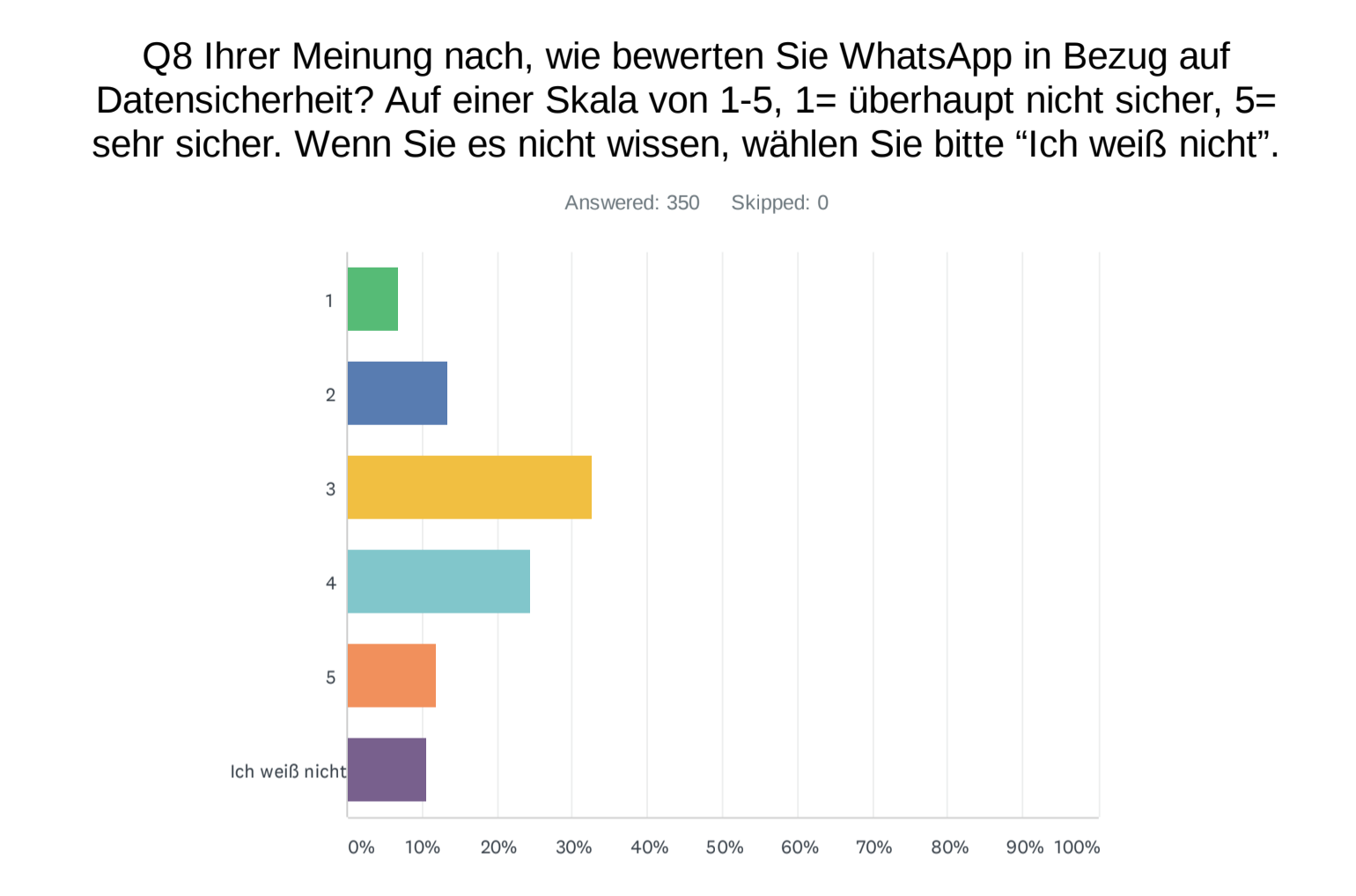 How would you rate WhatsApp in terms of data security?

On the global stage, WhatsApp has long been viewed as a secure mode of communication because of end-to-end encryption which makes it difficult for third parties to “eavesdrop” on messages.

The recent controversy around WhatsApp's new terms of service will probably, however, cause quite a dent in the messenger's reputation.

Owned by Apple, iMessage is thought to be one of the more highly-rated secure messaging apps. As on WhatsApp, messages are end-to-end encrypted. And because encryption keys are stored on your device, not even Apple has access to them. 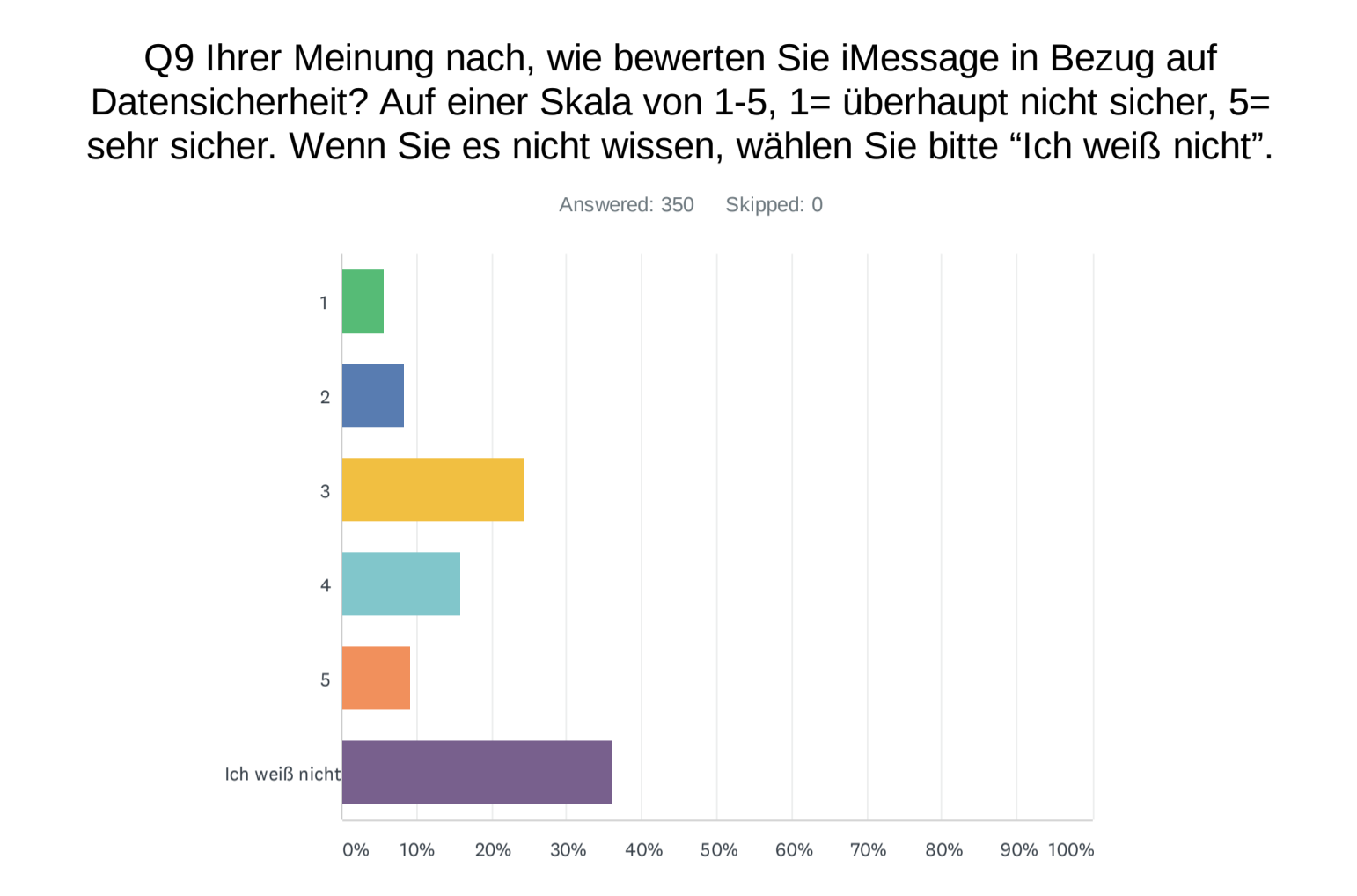 How would you rate iMessage in terms of data security?

Over a third thought Telegram was quite secure or very secure

36% percent of respondents gave Telegram a high rating when asked to rate its security on a scale of 1-5. This is good news for Telegram, considering that its use is not as widespread as other messaging apps.

It’s important to note, however, that encryption is only optional with Telegram. 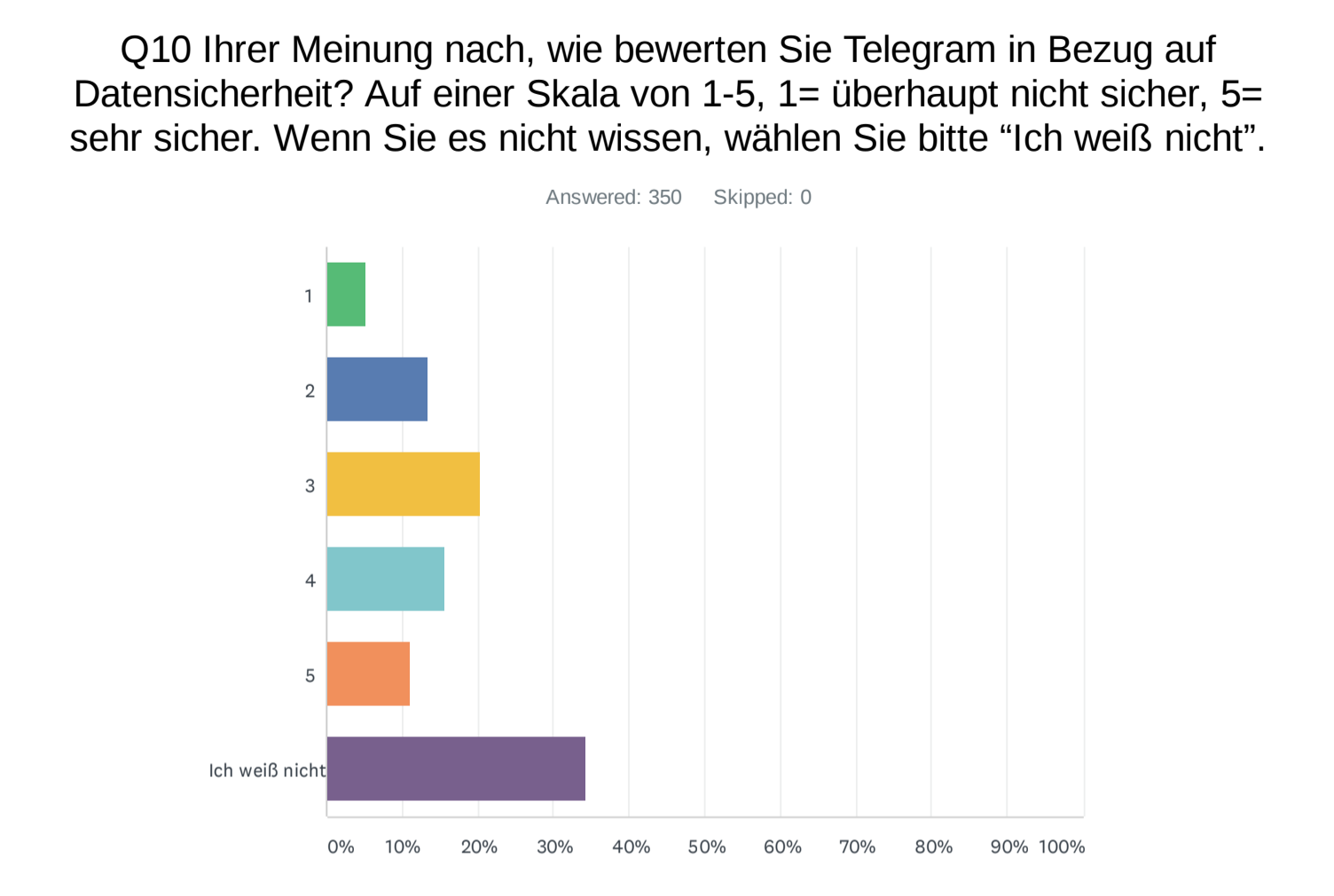 How would you rate Telegram in terms of data security?

More than half of the people we surveyed rated SMS quite highly in terms of security. 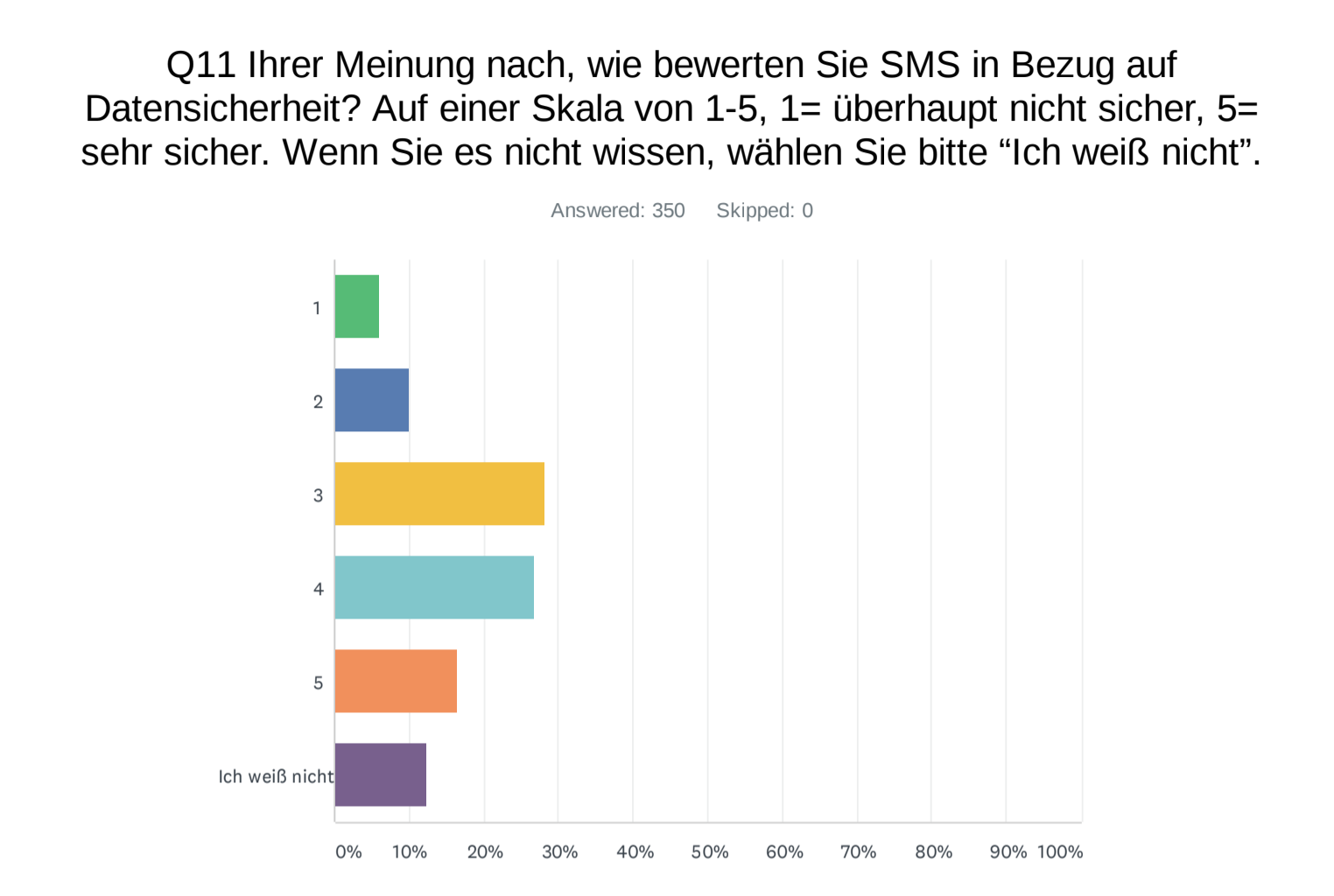 How would you rate SMS in terms of data security?

This perception may derive from the fact that no single company owns the platform, meaning it would be difficult to collect and sell data (Facebook-style) on a large scale.

However, because SMS messages aren’t end-to-end encrypted, they can be intercepted. What’s more, it’s possible for SMS messages to be sent to the wrong number.

Almost a third rated Signal as quite secure or very secure

Over 33% of respondents scored Signal highly on the security scale. Considering that Signal is one of the most secure messaging apps on the market, this is good news. 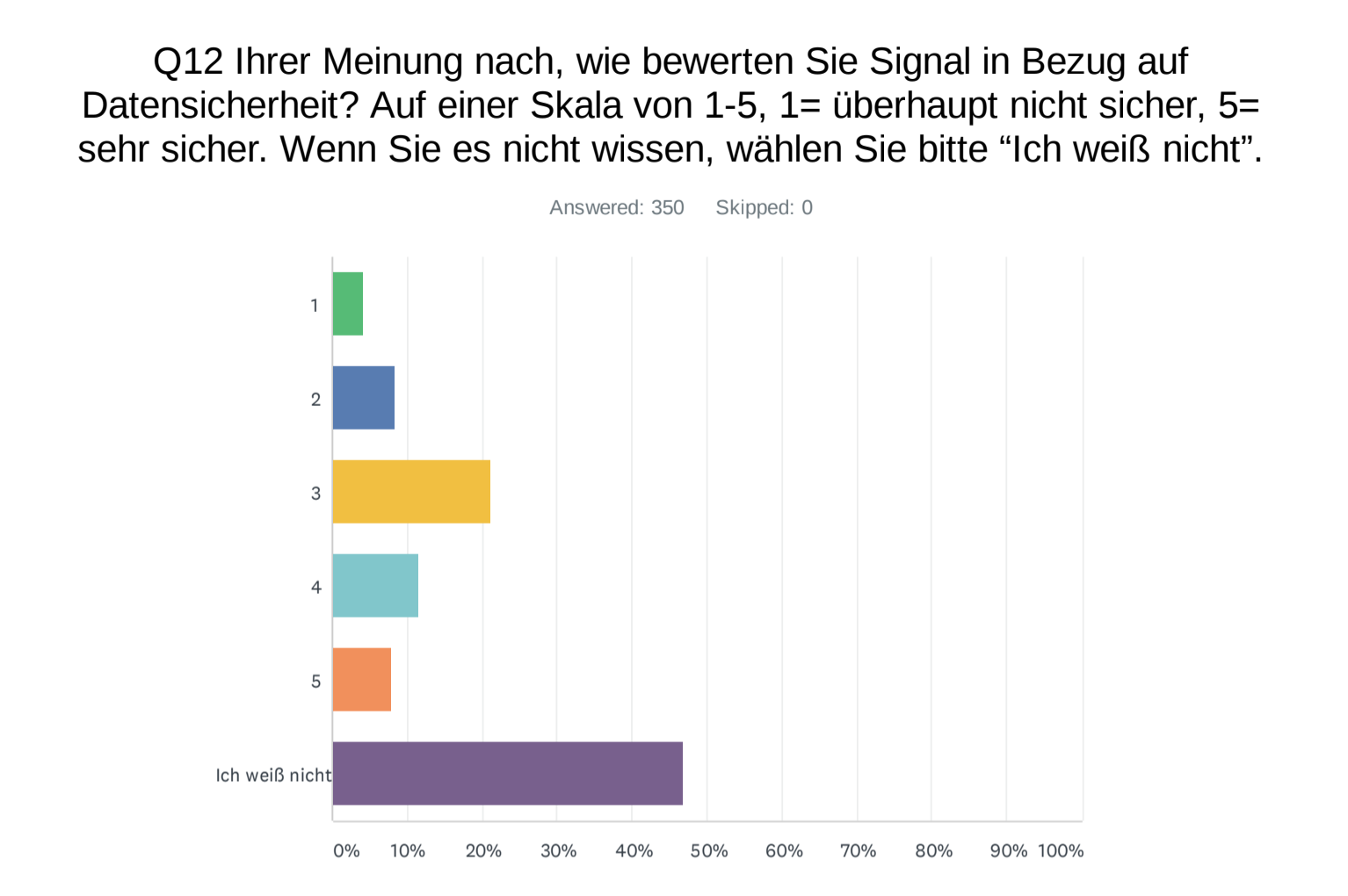 How would you rate Signal in terms of data security?

Those who weren’t aware about Signal’s level of security most probably had no experience using the app. Despite being launched in 2014, Signal only started catching on with the masses when it introduced features such as a new group messaging system, videos, stickers and reactions.

An overwhelming 60% of respondents were aware WhatsApp offered end-to-end encryption, but were less sure about other apps

Out of 350 respondents, 235 were sure that WhatsApp offered end-to-end encryption. Given that WhatsApp has more users than the other messaging apps and that it widely promotes its encryption feature, this was not surprising. 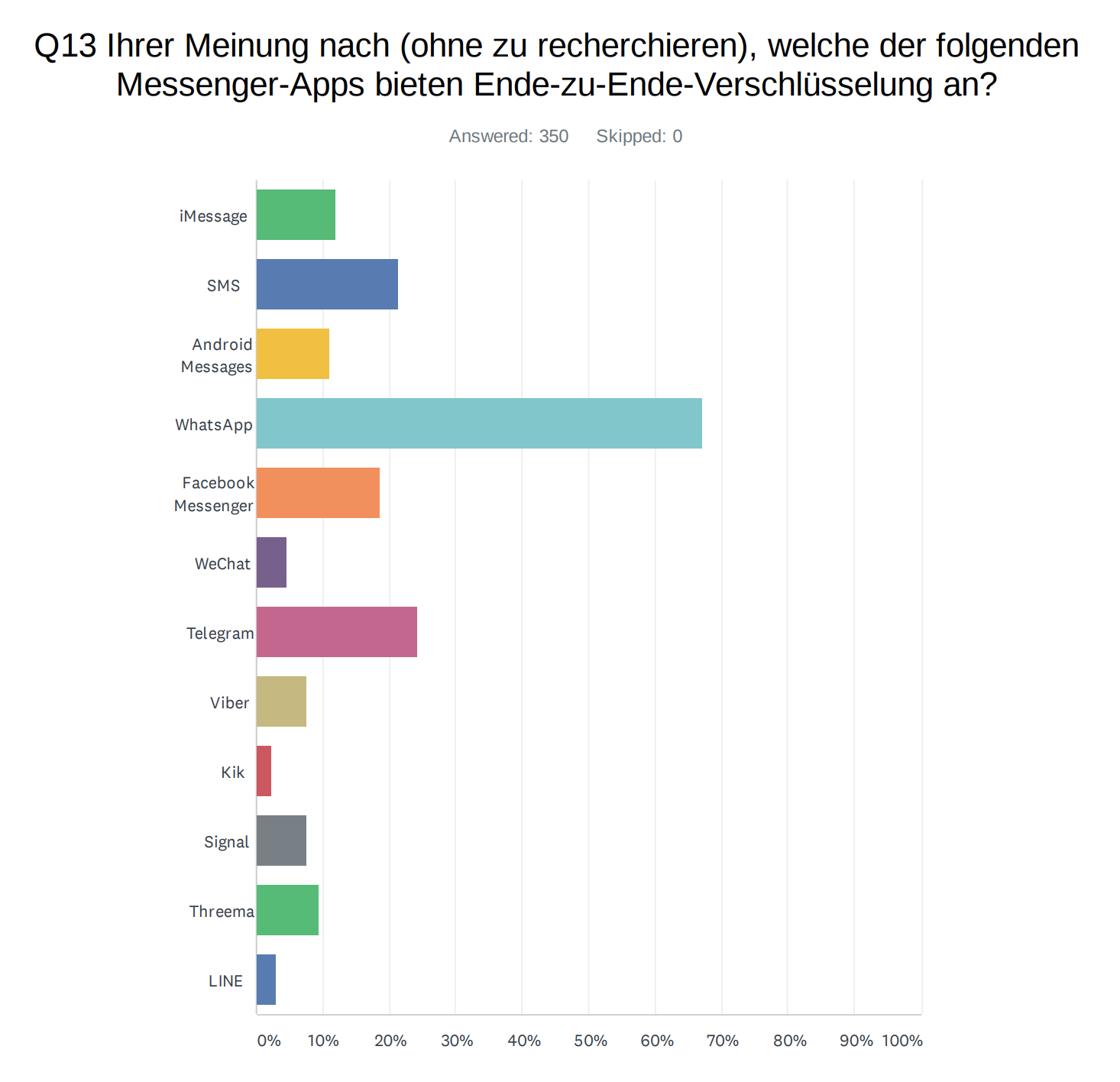 Without researching, which messaging apps do you think offer end-to-end encryption?

Facebook Messenger and Telegram were also thought to offer end-to-end encryption, although these features are optional, as aforementioned. On Facebook Messenger, this is enabled by activating “Secret Conversations” ; on Telegram, by starting a “Secret Chat”.

What the results tell us

People care about data privacy in their messaging apps, but their perceptions about messaging app security don’t always match reality.

The results also indicate that little is known about the most secure messaging apps, Threema and Signal. This is understandable, given the lack of widespread use of these apps in private communication and the lower marketing budgets of these providers.

As the topic of data privacy keeps growing, we expect these secured messengers to quickly grow along with it. If you're a business communicating with your customers over messaging apps, this rapid growth suggests that it's worth considering to open up communications over these “privacy messengers.”

For this reason, we've set up a Userlike integration with Threema. When connected, customers can reach you through Threema and their messages will land directly inside the Message Center. Read more in our article, “Introducing the Threema Channel – Customer Support on the World’s Most Secure Messenger.”

Chomparani is passionate about reading, learning and all things marketing. When she's not looking for her next book to read, she's hosting or going to quizzes.