What Do Customers Think About Messaging App Support?

Messaging apps have revolutionized the way we communicate and now, they’re starting to shape customer service as well.

Worldwide, there are over 3 billion users on WhatsApp and Messenger alone with over 41 million messages sent out every minute. Together with the convenience of messaging, it makes sense for businesses to introduce these channels into their customer service.

And it seems that customers would agree. According to a 2016 Twillio report, 9 out of 10 people globally want to engage with businesses via messaging.

As we’re a German software company, we were curious if these numbers held true for customers from the DACH region (Germany, Austria and Switzerland).

Here are our findings from surveying 350 customers.

1
Messaging has yet to really take off in business communication

Just under 25% of respondents said that they had used a messaging app to contact customer support. 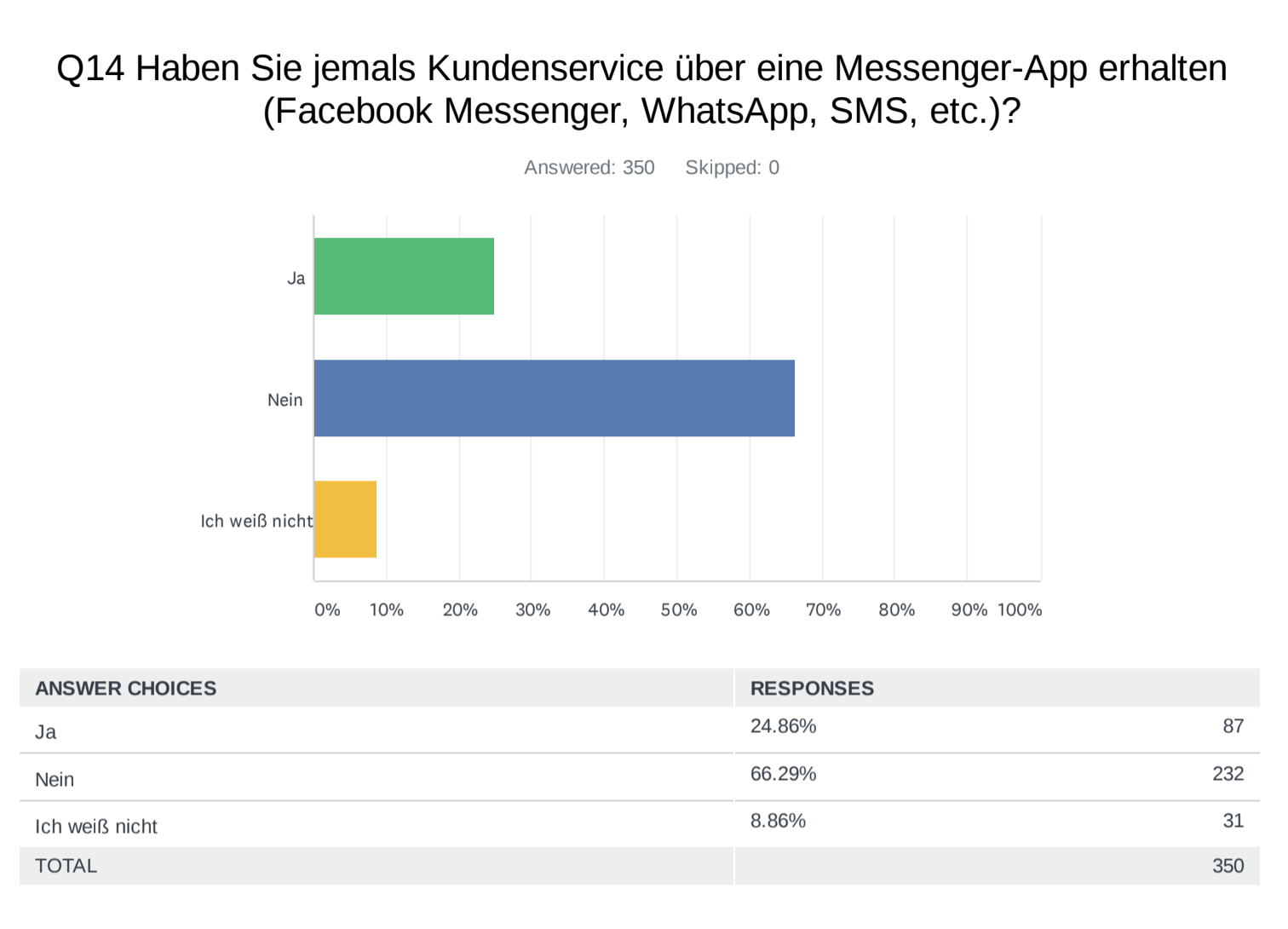 Did you ever receive customer service through a messenger app (Facebook Messenger, WhatsApp, SMS, etc.)?

One reason for this is that the main messenger, WhatsApp, has been rather slow in rolling out its Business API for enterprises, with companies having to go through an approval process. This is picking up speed now, and if you are a business interested in using WhatsApp, then you can get access through Userlike .

2
Speed, convenience and the personal touch are the benefits associated with messaging customer service

One of the biggest frustrations of traditional support channels is the waiting line experience. No wonder, then, that over 40% of respondents named shorter waiting times as a benefit of messaging support. 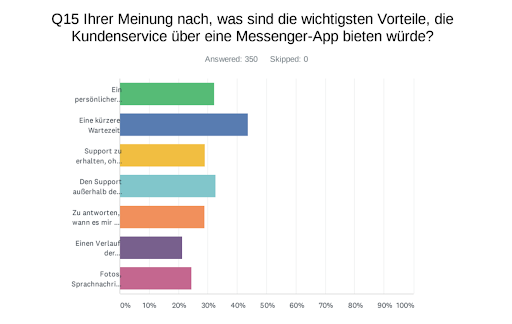 In your opinion, what are the most important advantages that customer service through a messaging app would offer?

People also liked that they could send a message and get back to it whenever it’s convenient for them. This is the main benefit of messaging support — customers don’t have to stay glued to their phone until someone answers and their case is resolved.

3
Over 50% of respondents would message a business

Given the opportunity, over half the people we surveyed would message a business. This was not surprising.

Everyone’s already messaging, so it doesn’t take any extra effort to message a business. It’s also not as expensive as calling a hotline. 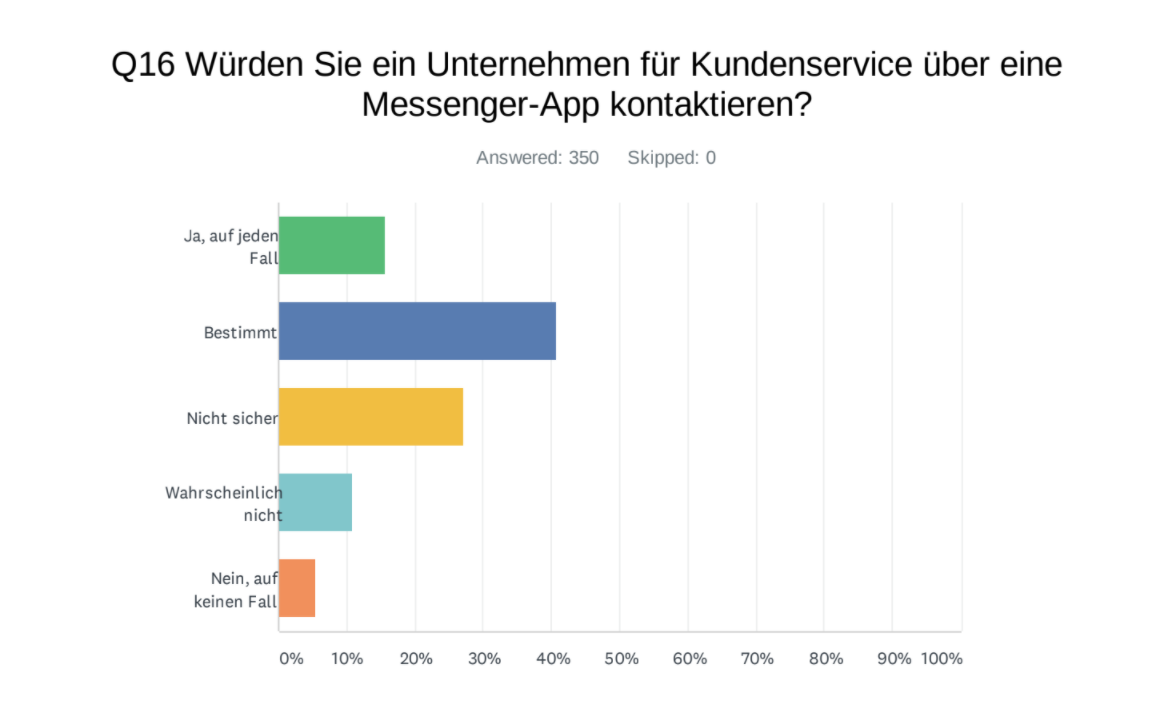 Would you reach out to a company for customer service through a messaging app?

There was, however, a big group of ‘not sure’ respondents. This is most likely because many don’t have experience with messaging support. However, we’re convinced that once they experience the convenience of messaging, these respondents are likely to move to ‘bestimmt’ (‘definitely’).

This is why it's important for companies, when they offer it, to guide their customers to messaging support.

48% of respondents said they would like to receive order updates via a messaging app. For companies already offering messaging support, this is good news, as consent has to be obtained before you can message customers. 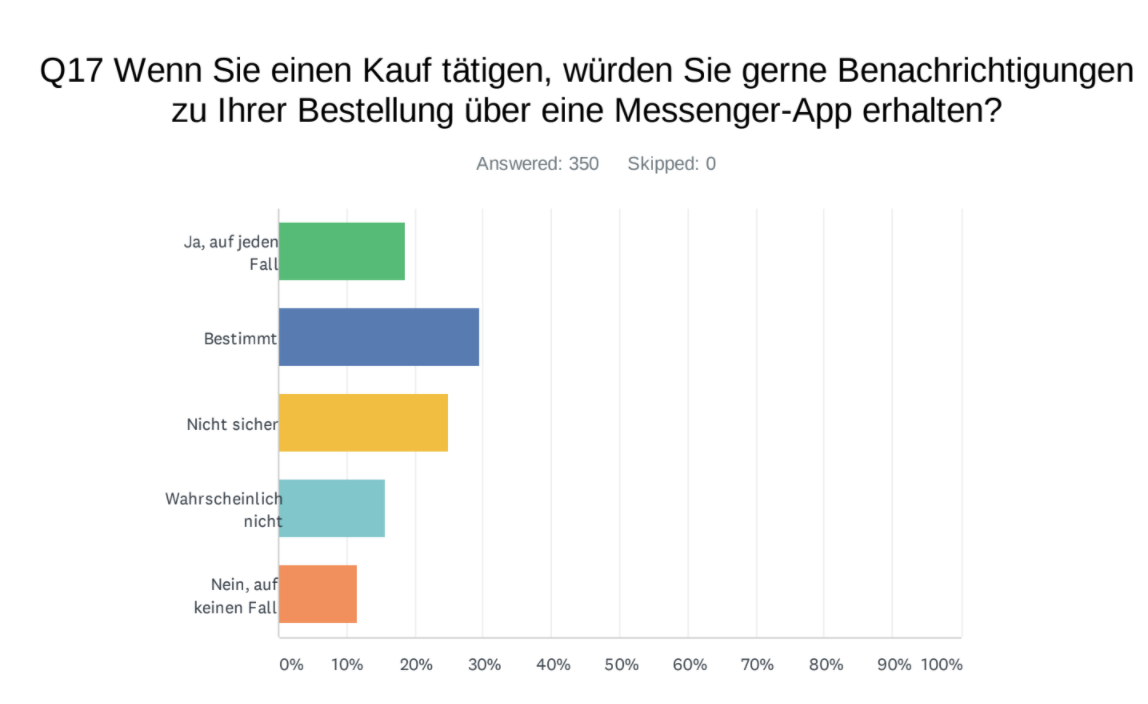 When you make a purchase online, would you opt in for order notifications through a messaging app?

What’s more, once you’ve made it onto your customers’ contact lists, they’re more likely to message you rather than call or email.

Most respondents thought messaging support would be the same or somewhat better than email support. 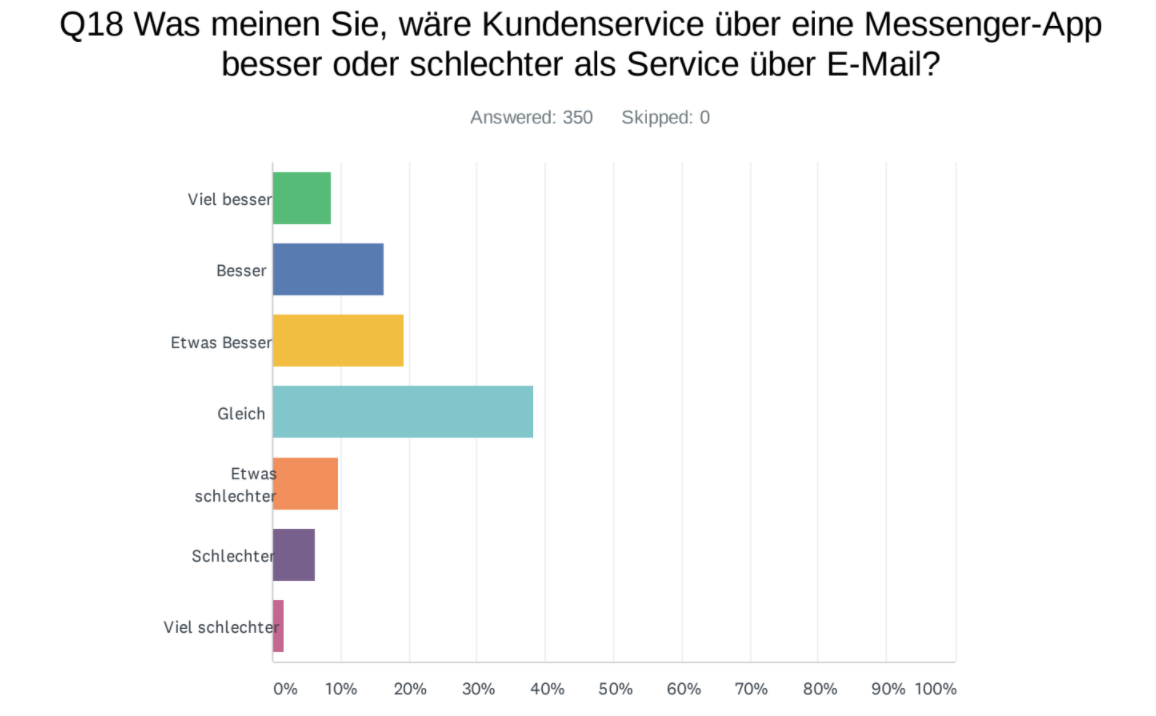 Given the relative newness of messaging apps in customer service, it’s logical that respondents thought it would be the same. If people haven’t experienced messaging support before, they won’t realize the benefits of it.

6
The same applies for messaging vs. phone customer service 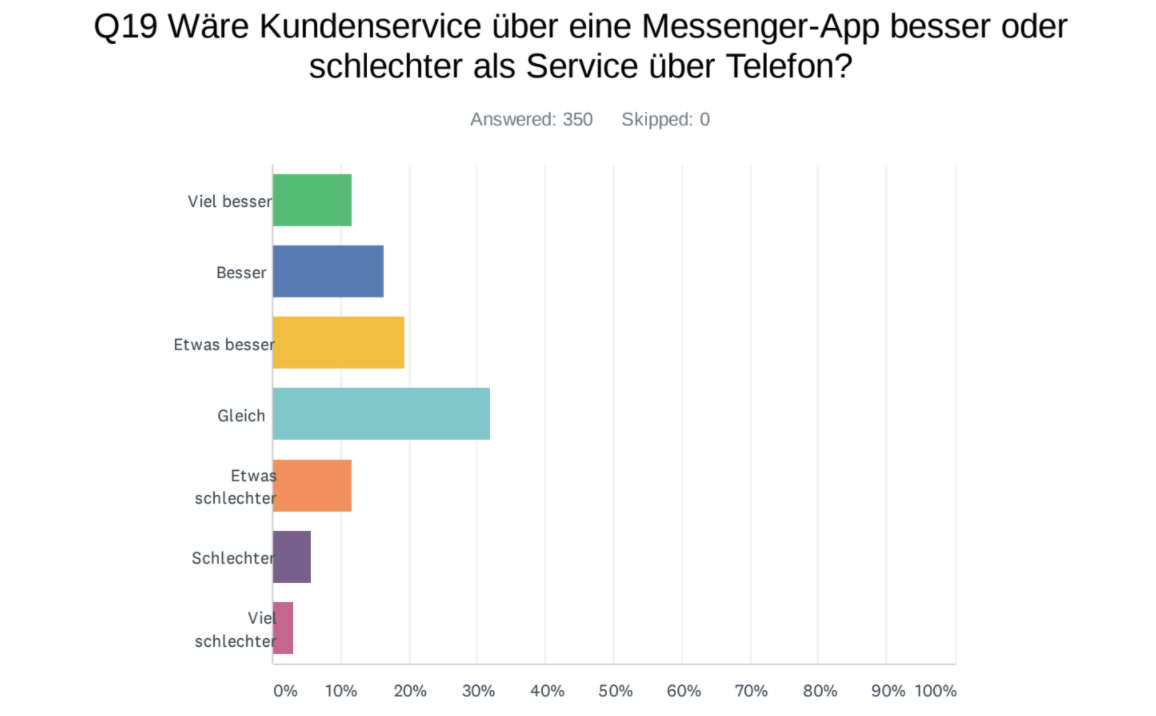 Many companies still fall back on phone support, although it has proven to be costly and inconvenient on both sides. They believe that customers benefit from the human touch and that the phone offers faster resolution of issues.

While this may be true, to some extent, in reality, phone support frustrates most customers due to the long waiting lines, audio harassment and the never-ending phone menus.

According to research, customers don’t care so much about the channel as whether their issue gets resolved and whether they have to jump through hoops to contact you. This is an indication for companies to offer customers the channel that’s most convenient for them.

At Userlike, we believe that to be messaging, but then again, keep in mind that we’re biased :)

Our findings come from 350 customers from the DACH region whom we surveyed on SurveyMonkey. While respondents were compensated for their time, we didn’t provide them an incentive to answer questions in a specific way.

The gender split of the respondents was about even. Almost 40% fell in the 30-44 age range which correlates roughly with global usage. The exception here is WhatsApp which is popular among all age groups. 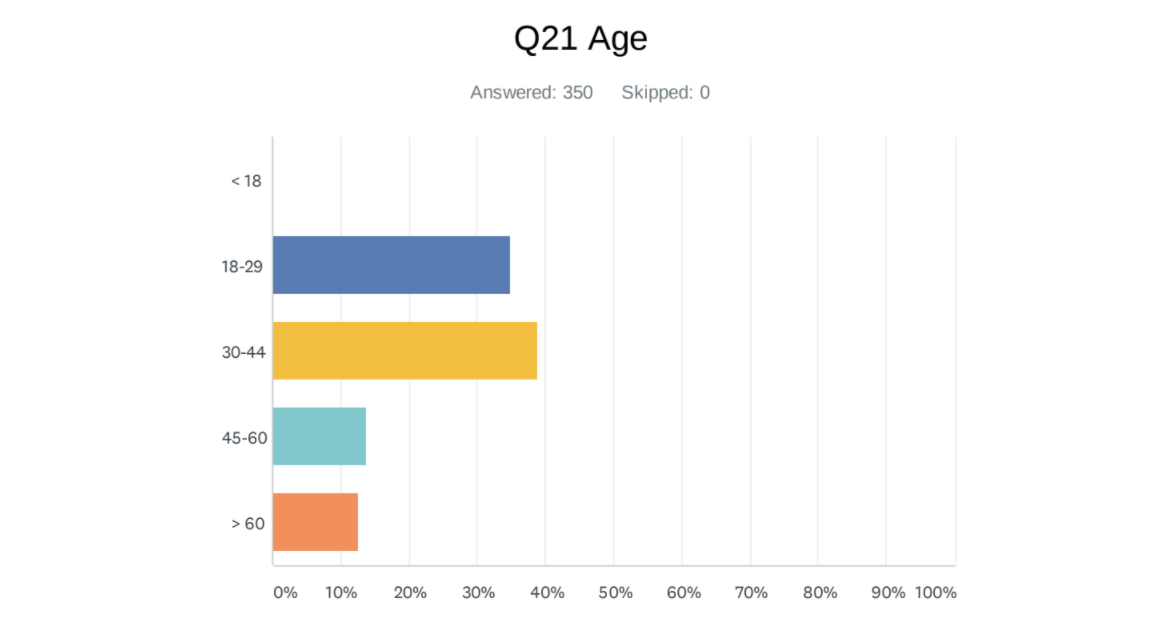 What the results tell us

Most respondents liked the idea of messaging businesses. It’s fast, convenient, and aligns with messaging habits. But some weren’t sure whether the level of service offered via messaging apps would be better or worse.

Given that only a few businesses have adopted messaging apps as customer service channels, this is understandable.

This is an indication that businesses could do more to improve people’s perceptions by integrating messaging apps into their customer support.

Our messaging solution collects popular messaging apps like WhatsApp, Facebook Messenger and SMS alongside lesser-known apps such as Threema and Telegram. No matter which messaging app your customers use, our Message Center allows your support team to answer everything from one place.

If you’re not already using Userlike and would like to give it a try, you can sign up here for a 14-day trial.

Chomparani is passionate about reading, learning and all things marketing. When she's not looking for her next book to read, she's hosting or going to quizzes.