For most companies, blogging is strictly a marketing job. But a blog can be more than just a marketing tool.

It can be a platform to showcase ideas, talent, and values. What’s more, the act of writing itself provides a number of benefits for the individual, professionally and personally.

Five arguments to convince your teammates to pick up a pen.

Liam Nolan explains it quite well - a happier employee is a better one. Consequently, any action that sustains an employee's work focus while improving their wellbeing is also good for the company. Writing is such an action.

Psychological research hands us some scientific proof. The therapeutical effectiveness of expressive writing is well-documented by research for many forms of mental or physical illness.

As Tara Parker-Pope summarized in her NYT article , the positive effects were also found with subjects in emotionally challenging situations like academic struggle, marriage conflicts.

Another study tracked two groups of recently fired engineers. The researchers asked one to regularly write about their thoughts and feelings after being laid off, the other group didn’t write. 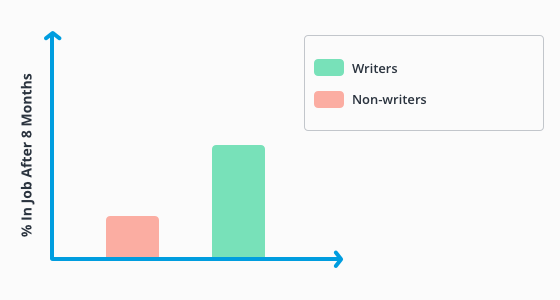 After 8 months, most of the writers had found a new job.

The writing engineers showed significantly less frustration about job loss and animosity towards their former employer. Also, 52 per cent of the writers were back in jobs after 8 months, compared to 19 per cent of the non-writers.

Telling your spouse or a good friend about challenging, motivating, but also exhausting projects at work makes you feel better. Regular blogging has a similar effect on us, as research by Tiwanese psychhologists Ko & Kuo gives vital reason to believe .

With proof for the benefits of writing in such a host of different situations, it’s easy to assume they’d also hold up in the everyday life of the employee in an ambitious company.

Harvard neuroscientist Alice Flaherty explains the positive effect of blogging about stressful events of any kind on body and mind with a triggering of dopamine release. She suspects writing to cause this just like sports and consumption or performance of the arts do. So, let your employees blog and their mood will be lifted, making them more valuable for you.

Getting to the bottom of things requires mental effort. If people in your company systematically shy away from it, this can lead to sloppiness in how they execute plans and lack of inspiration to try something new.

Deep thinking is like an excavation of ideas and wisdom: the deeper you dig, the more likely you are to find great things that challenge or confirm your previous assumptions. But this also entails turning every stone, sorting through vast amounts of relevant and irrelevant information, variables and their interrelations.

A difficult task for your mind, which can only retain and access so much at a time. Thus, the limitations of a human’s memory also limit the depth of their thoughts.

If I put down something, that thing will help the next thing come, and I'm off. If I let the process go on, things will occur to me that were not at all in my mind when I started. These things, odd or trivial as they may be, are somehow connected. And if I let them string out, surprising things will happen.

William Stafford, A Way of Writing

Writing allows you to store information elsewhere. Any Einstein or Hawking would have never gotten to a single major conclusion without a blackboard. Notes are inevitable for practical reasons. Blogging, however, has its very own potential.

Research has shown that writing out thoughts significantly improves critical thinking as well as analysis and inference skills. Which appears logical since writing also urges you to reflect and look at a topic from different perspectives.

This is all the more true for content meant to be published on a company blog. Here, writing works like a quality filter for thoughts. If you know people will read your post, you test your argumentation so they can’t tear it to pieces later on. It’s a lever to increase overall accuracy. At the same time, it inspires you to think into different directions and try new paths.

Again, the approach to writing will also reflect in your blog contributor’s approach to their actual work. In meetings and brainstorm sessions, people will focus on their arguments instead of trying to make themselves noticed for the sake of it.

A creative environment. Groundbreaking ideas are often found unexpectedly. While it’s impossible to find a reliable process to reproduce them, you can create an environment in which they can grow. A blog greatly helps with that.

Often, at the stage of weighing up thoughts, whole new ideas present themselves. When I write a post, inconspicuous subpoints suddenly jump at me and inspire blog topics of their own or other ideas on how to improve the business I’m part of.

A company blog is like an excavation site inviting everyone in your team to join in and find their own special piece while being part of something bigger. Meanwhile, (ideally) the whole world is watching what you’re about to dig up.

More modestly, though, your blog nourishes your staff’s motivation to constantly update what they think they know. This is a prerequisite for developing grand ideas in the first place.

A creative mind. Cognitive science research delivered evidence that creativity correlates with all sorts of intelligence. It’s a quality you just want in the people that try to push your company forward every day. Paul Jun neatly summarizes how writing supports creativity and clarity.

Designer Tom Kenny described creativity as an inherent potential that but lies dormant unless you exercise it like a muscle. Writing then is the iron you pump.

Bad communication can threaten productivity in any company making use of written collaboration tools. Most often, it stems from an inability to present information in a way that is comprehensible to others. In other words, to talk in one language.

The movie Arrival masterly illustrated how agreement on a topic is rendered irrelevant when the discussion parties have no means to make themselves understood. Your colleagues from different department are likely easier to understand than aliens, but the problem is by far not exclusive to sci-fi realities.

In both emotional intelligence and in hard sciences like mathematics, writing has been shown to help people communicate highly complex ideas more effectively. Writing helps eliminate “it sounded good in my head” by forcing your hand; brains forgive fuzzy abstractions, prose does not.

You know the following situation: You’re in deep discussion with someone, you try to tie the various ends of a complex issue at the same time to present a strikingly logical conclusion... only to notice that you’ve missed a detail and it all falls apart. “Gimme a sec…”

This is frustrating for you but it’s also harmful to your company. Things are left unsaid, miscommunicated, misunderstood.

Unless you’re encouraging your employees to publish a stream of consciousness, they will automatically train structuring thoughts when they blog. Information will flow more efficiently and complex discussions will not scare off anyone.

Everyone in the company will understand each other better both by reading posts on each other’s current topics and because everyone’s communication skills constantly improve. Besides, you create an environment that bolsters and rewards good, clear communication.

First and foremost, the Userlike blog is a marketing vehicle. But as shown by previous posts like this one on company core values by our founder Timoor, a company blog can work as window through which the world out there can look in.

Big corporations are usually trying hard to appear humane, to prevent the image of a cold, stiffly hierarchal organization. A blog gives you the opportunity to show what your company stands for and where it comes from. To give insights into what’s happening behind the gates and, most importantly, which enormous talent is at work there.

Especially the technical experts in a company often lack visibility, although their work is essential for its survival. This isn’t about dragging people into the spotlight against their will. It’s about giving them an opportunity to show a bit of their work that resulted in great product features.

The company benefits by highlighting how much it values the work of their employees, no matter their position. It’s a signal to potential customers that the company is trustworthy and transparent. Also, it’s a signal to job candidates that their talent will be appreciated and that self-development is encouraged.

But there are some self-serving reasons for the ones writing, too. “A well-constructed blog post is a career asset for the author, silly as it may seem.”, writes Gregory Ciotti . He points to the fact that a complete story about how a project was wrapped up is much more revealing than a mere bullet point in one’s resume.

Some employees’ work doesn’t offer anything to permissibly share with the public. These people in internal company affairs can write about other projects that shine a light on their way of getting things done: the planning of company events, their desk setup, how and why they brought plants into the office, or private projects that inspired efforts in their job.

How to get people to write

Motivate them. Tell them about all the benefits you’ve just learned here. How they’ll become happier, smarter, better through writing. That’s the way in which I’ve tried to hook my colleagues onto it in a recent talk at our quarterly company event Userlike Thursday, which sparked the idea for this post. We encouraged the others who presented talks that same night to turn their already existing notes into a post as well. 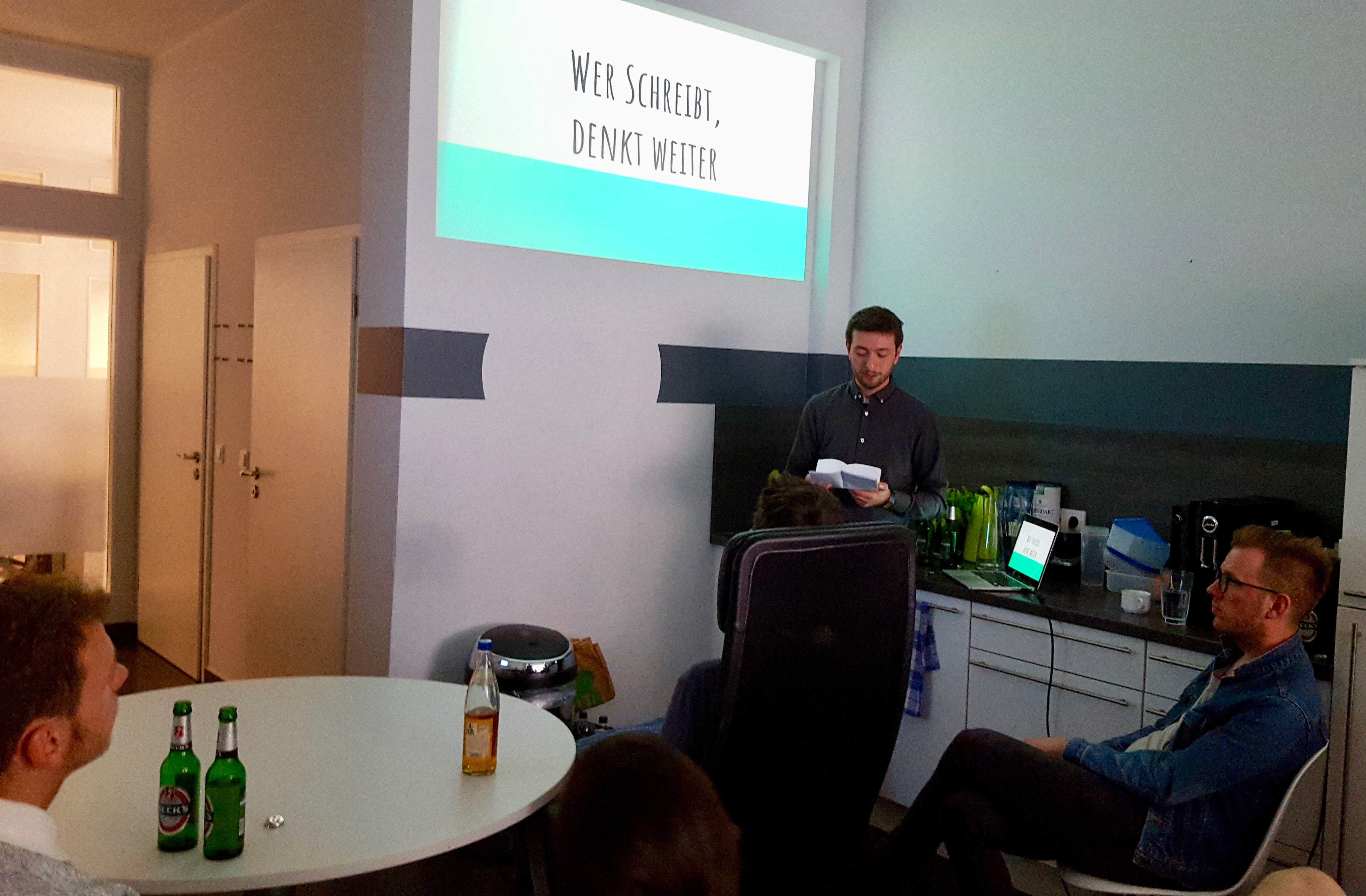 Making people write by telling them what’s in it for them.

Start small. For those who haven’t written texts longer than emails since college, the thought of writing a whole blog post might seem frightening. So, first encourage little steps that put them back in touch with the written word.

Focus on them picking up the pen. Let them form a habit by keeping a journal, collecting thoughts in a commonplace book , or, as suggested by Mattan Griffel , writing “morning pages”.

Let bloggers guide colleagues. Let your marketers tell the soon-to-be-contributors about how you started out, your struggle and progress, what good came of it. Let them know that you too started small, that it’s about the content and getting their ideas broadcast in the most appealing way.

Guide them through your content creation process and help them by rewriting their post to make the piece flow. Add short comments explaining why you’ve made a certain change.

Get books on writing. Our tips:

Building a company wide blogging culture is no overnight job. The benefits, however, more than make up for the effort. Apart from its practical advantages, it can add some edge both to your company’s image as to that of your employees.