At Userlike, we believe in the power of human-to-human contact, but recognize the value service-bots can bring to messaging. This is why we offer the possibility to either integrate your own chatbot with our API or to create rule-based bot flows written in the Userlike Bot Language (UBL).

Your UBL file should always start with a `config` key containing essential configuration information for your script. `config` should contain an `abort` and a `skip` parameter. The keywords you define here will be used to trigger the abort sequence, which allows the contact to immediately quit the bot flow, or to skip input steps you‘ve defined as optional.

After uploading the script to Userlike, you are ready to test it. To do so, go to a page that contains the Widget you‘ve associated your chatbot with and start a conversation. Test all conversation paths and see if the conversation flow works as expected. If you discover something that needs adjustments, just open your `.yml` file in your favorite text editor, make adjustments and upload it again to test your changes. 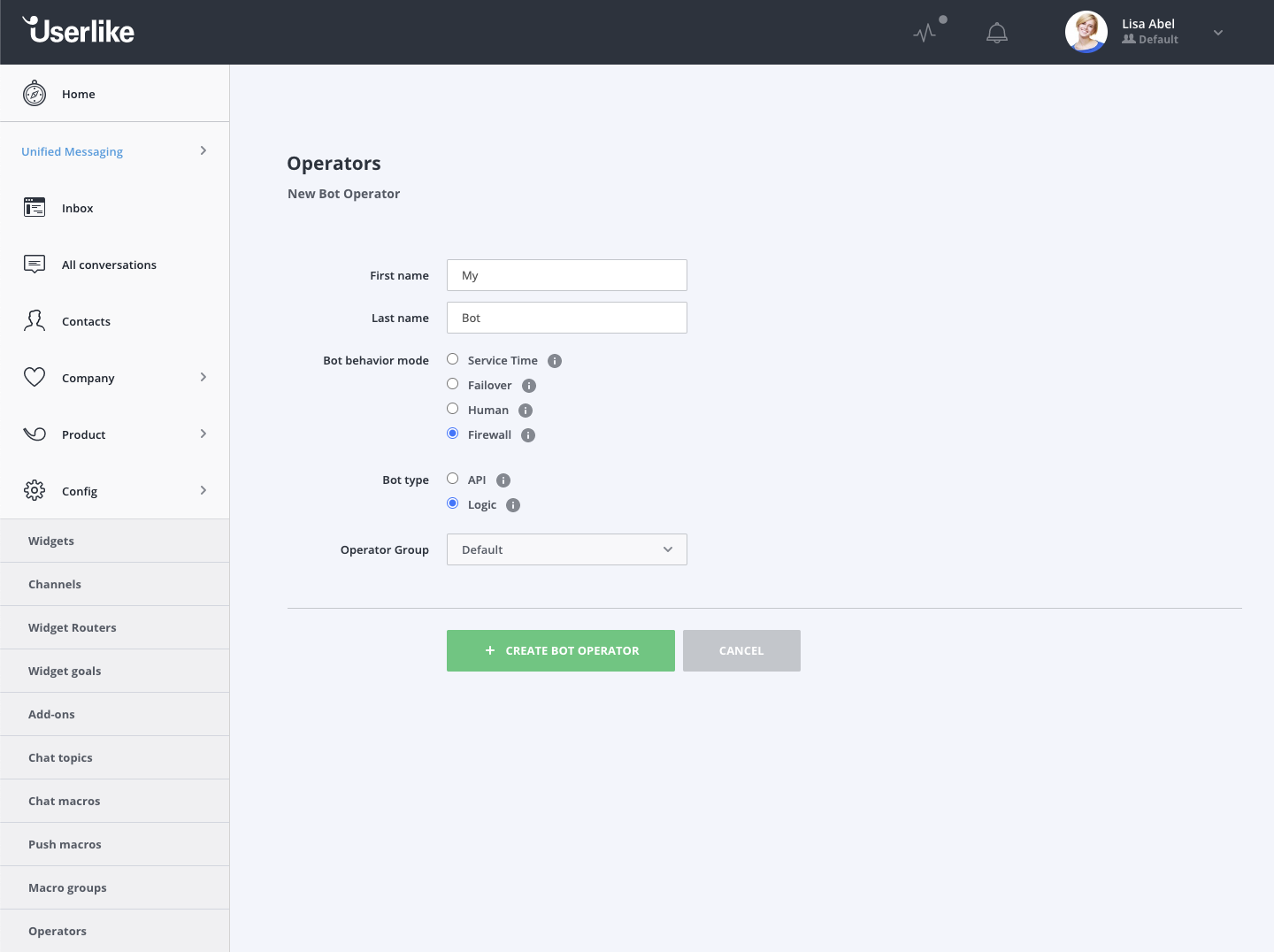 Define a time with no reply from both contact and bot after which the conversation is considered inactive. Once this happens, the bot can perform one of the following actions:

Note that bot conversations don’t show up in your Inbox as long as they’re active. Your operators will only be able to see them once they end, are unassigned or forwarded.

You can upload your script by clicking on the "Upload script" button. **Please upload a valid YAML file with the extension .yml**. 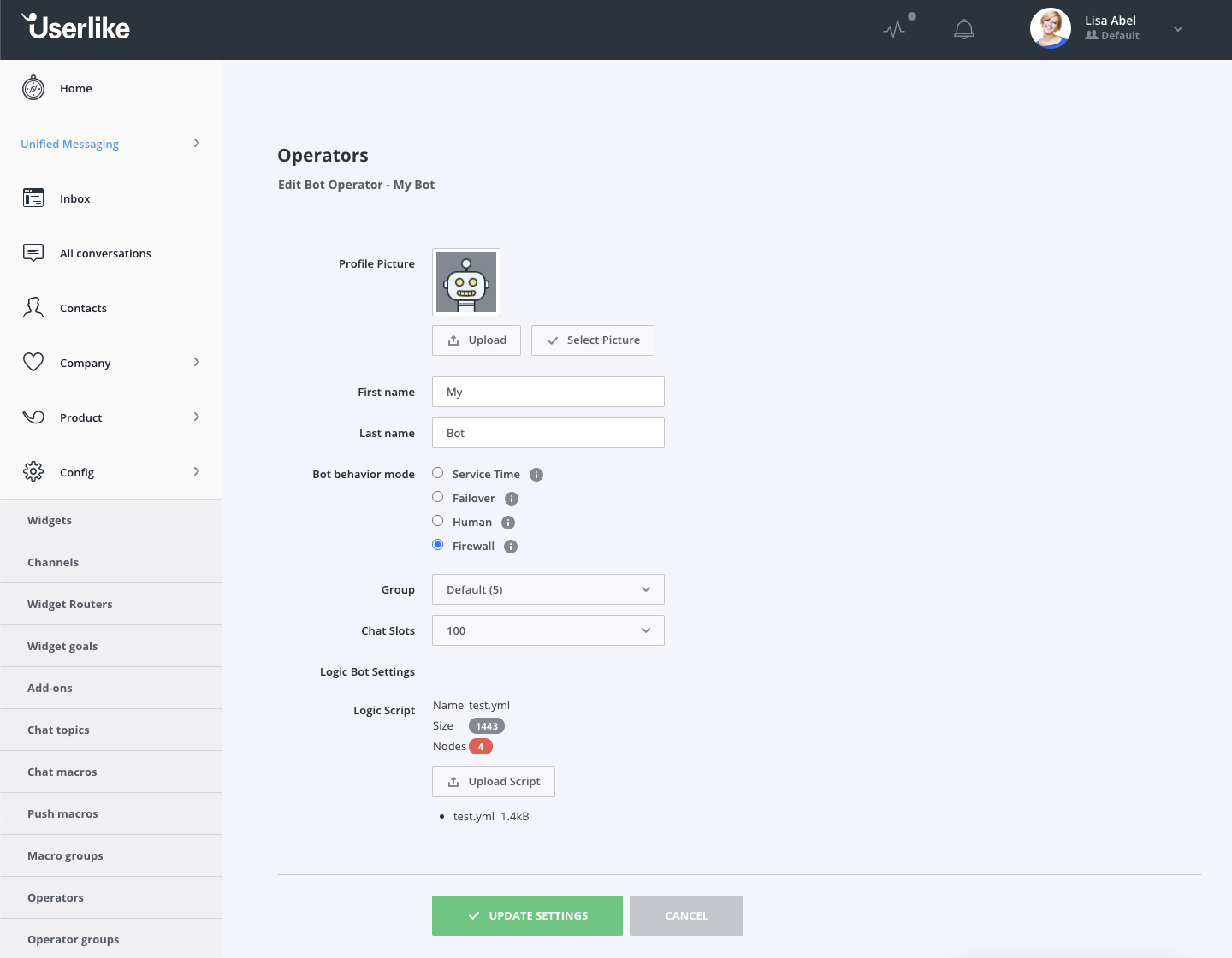 This is the node type displays media types like images and videos.

Example of a media node:

This is the node type to display buttons with clickable links. It also supports variable expansion, so it can be used to address the contact with their name, for example. Variables are expanded by wrapping them in double curly braces.

Example of a button node:

The `exists` parameter itself needs the argument **where**, which can have a value of either `contact` or `context`, depending on where the information is stored. 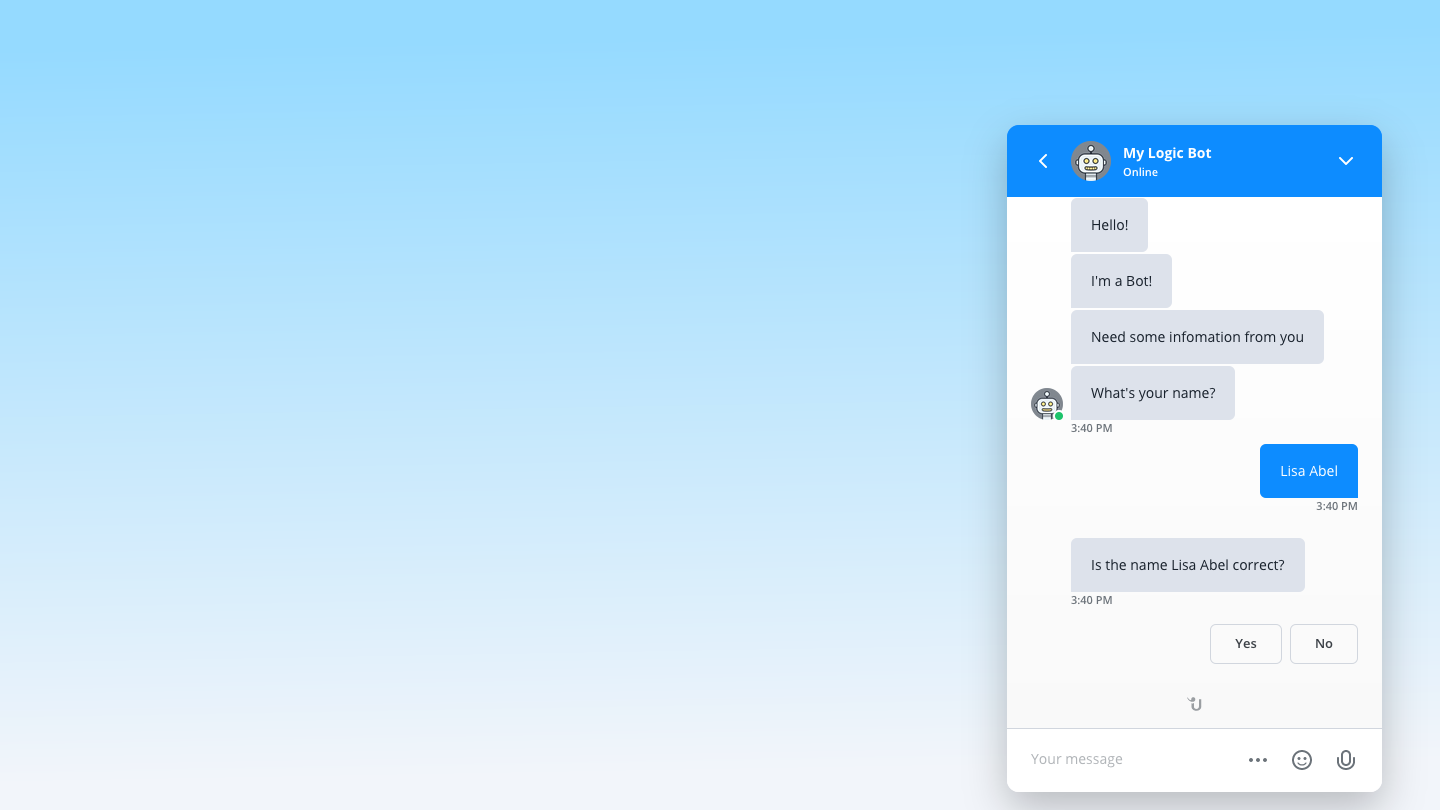 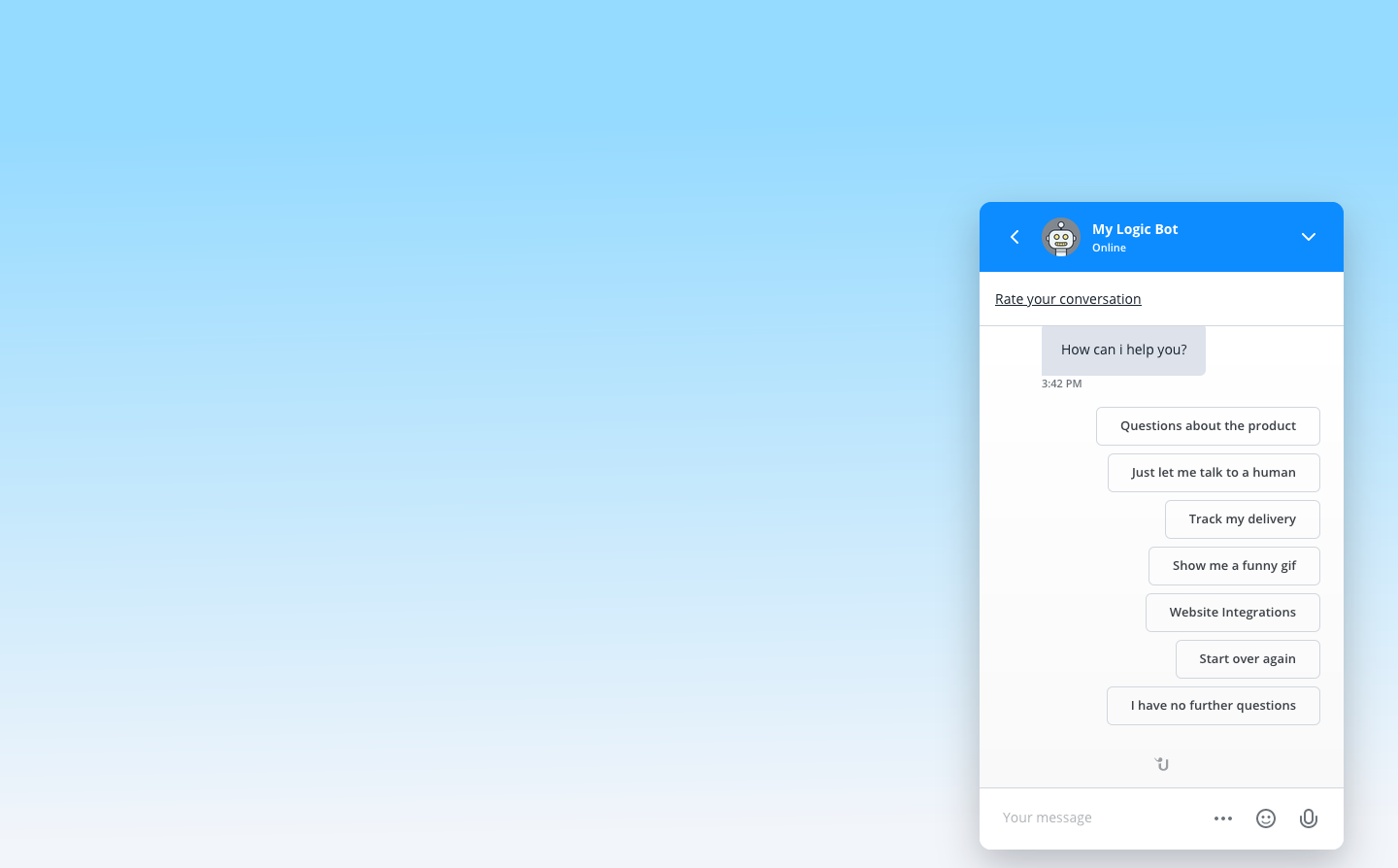 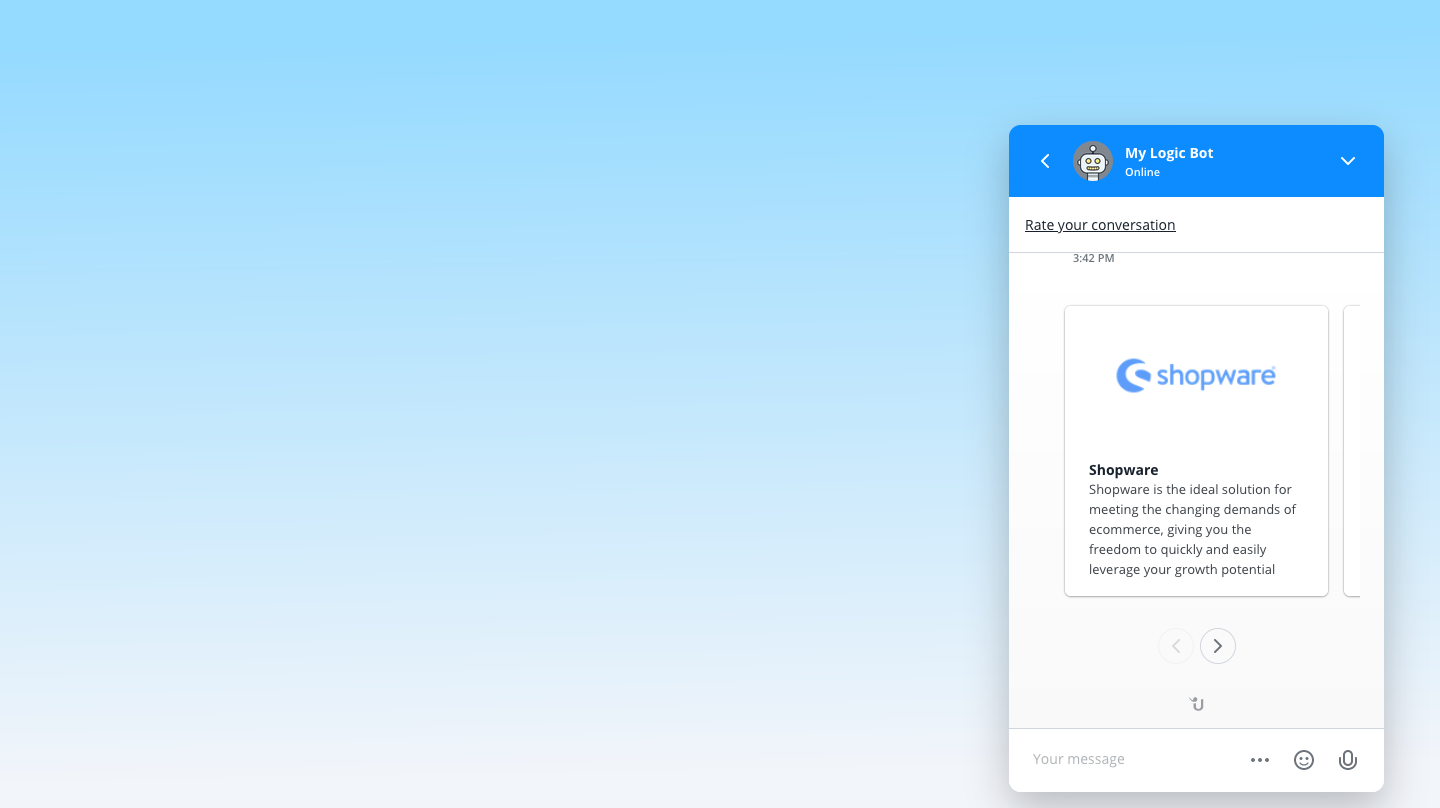 The `option` map in the carousel node is slightly more complex than that of the bubble node. We've annotated the possible keys in the example below:

As you can see, the API node only has two parameters at the top level. `api` itself takes three parameters that specify the request and response as well as what happens when the request fails or succeeds. This is described in the table below:

The received JSON object is saved to the `result` variable. We can access the data at the top level of the object by expanding the keys by wrapping them in double curly braces. The same applies to accessing the data inside the `company` object. To signal that `{{name}}` in the second instance should refer to the name of the company and not to the name of the person, you can use a section by surrounding it with `{{#company}}{{/company}}` where appropriate.

We‘ve already seen in the previous examples that every step ends with an action. Until now, we‘ve only used actions to proceed to the next step in the conversation flow by using the `next` command. UBL offers several more commands you can use in order to set or clear data of your contact, to navigate, or to forward the contact to human operators.